Durban - ONLY polymerase chain reaction (PCR) tests are being used to test for the coronavirus in South Africa, which can detect infection before patients become symptomatic, and not rapid serological tests, which are not recommended by experts for public use. 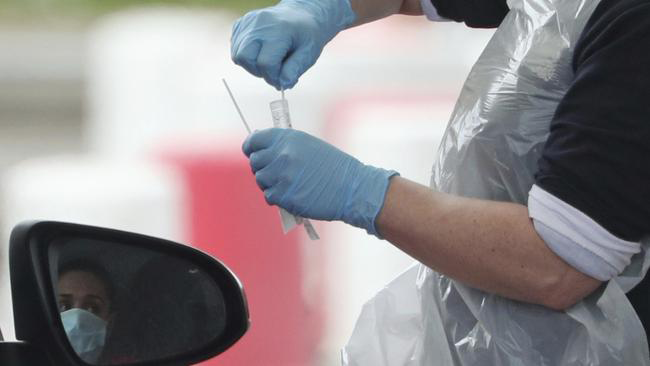 A NHS worker is tested at a drive-through coronavirus testing site in a car park at Chessington World of Adventures, in Chessington, England. File Picture: AP

Professor Tulio de Oliveira, a geneticist and director of Krsip (KwaZulu-Natal Research Innovation and Sequencing Platform) at the University of KwaZulu-Natal, said: 'The PCR test is a very important test as it has shown that identifying patients before they get sick decreases the number of secondary infections.'

'It also increases the chance that the patient, if needed to be hospitalised, is at the hospital early enough with the right diagnosis, which improves the chance of recovery.'

'This test is also very important to healthcare workers as you want to catch infections on them as soon as possible to avoid hospital transmission and to protect them and their families,' De Oliveira said.

While the serology test does not necessarily indicate a current infection, it can detect if somebody had a previous infection.

'This means that previously infected and recovered healthcare workers could be released to return to work. It also could identify areas where a high percentage of the population were infected and presumably become resistant to infection.'

'The scientific and medical community currently believe that a person will get infected only once, but we need more data to fully understand the risk of secondary infection,' De Oliveira said.

Dr Boitumelo Semete-Makokotlela, the chief executive of the SA Health Products Regulatory Authority, said rapid tests were not intended for diagnosis of acute infections and should not be relied upon for self-testing as they may be interpreted as meaning that someone is not infected with the virus, when they may actually be infected already.

These tests are designed to be used under the direct supervision of a healthcare professional in epidemiological surveys.

'The South African public is reminded that at this stage, the use of serological test kits is not recommended.'

'The public is discouraged from using rapid test kits, claiming that you can test yourself at home or test yourself under the supervision of a healthcare professional to determine whether or not you have a Covid-19 infection,' Semete-Makokotlela said.

Sooliman said all government departments had been told that only PCR tests would be used, however,= a new, more efficient test is expected to arrive next week.

'Once that happens then there will be more stock available in the country. So we can have two systems of testing.'

'The second one will be exactly the same test but there is an additional supplier,' Sooliman said.

'The new kits coming in are much faster than the first one. The first one has a turnaround time of 24 hours but in most cases now it's taking eight days because of the demand.'

'The new one has a turnaround time of 45 minutes. The advantage of it is that it could be used to conduct at least 50 tests per hour.'

Moreover, Gift of the Givers will be opening up more test sites. They ­currently have four running and will add another seven by the end of the week.

In KwaZulu-Natal, the test sites can be located in Durban, Pietermaritzburg and Shelly Beach. Gift of the Givers will be adding oThongathi and Eshowe next week.