Some people mount an immune response able to fend off a menagerie of coronavirus variants. Nature news covering four of our recent papers on the variant, neutralisation of plasma and Vaccines (Novavax and Astrazeneca) 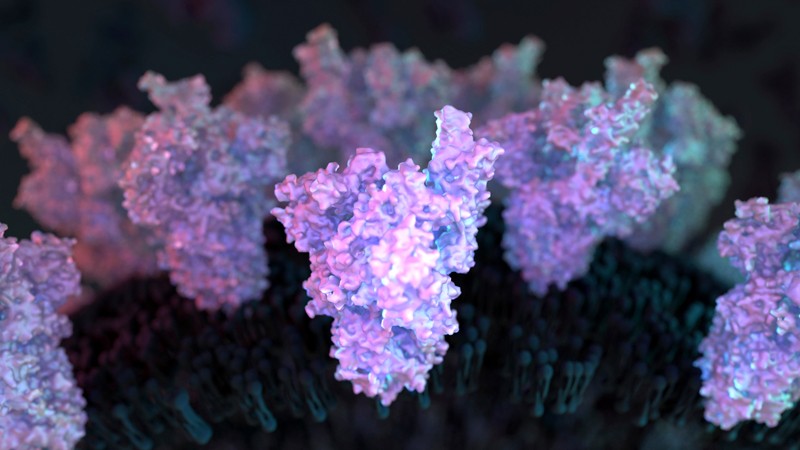 An illustration of the spike proteins that the SARS-CoV-2 virus uses to break into human cell membranes.Credit: Design Cells/Science Photo Library

Penny Moore was one of the first scientists to show that a coronavirus variant identified in South Africa could dodge the immune system. So the virologist was expecting more grim news when she tested the immune responses of people who had been infected with that variant, named B.1.351.

Instead, her team found a ray of hope: B.1.351 infection triggered antibodies that fended off variants old and new. 'That was a surprise,' says Moore, who is based at the National Institute for Communicable Diseases and the University of the Witwatersrand in Johannesburg.

The discovery, posted to bioRxiv this month1, joins a slew of recent research suggesting that vaccines might cope with coronavirus variants of the past, the present  and maybe even the future.

'Getting vaccines that will tackle the variants that are currently circulating is an eminently solvable problem,' says Paul Bieniasz, a virologist at Rockefeller University in New York City, whose laboratory is studying variants. 'It might be that we already have that solution.'

Researchers in South Africa identified B.1.351 in late 2020. It now accounts for the majority of the countrys cases and has spread around the world. The variant attracted scientists attention because it was linked to outbreaks in places that had already been hard hit by South Africas first wave, earlier in the year, and because it carried changes that blunted the potency of some antibodies that ordinarily disable SARS-CoV-2.

Research led by Moore and Alex Sigal, at the Africa Health Research Institute in Durban, stoked early worries over B.1.351 in January2,3. It showed that the variant evaded virus-blocking antibodies produced by a large number of people who had been infected with first-wave strains. Weeks later, clinical-trial results showed that the variant diminished the efficacy of vaccines developed by Novavax4 and Johnson & Johnson, and potentially wiped out much of the protection conferred by AstraZenecas jab5.

Moore hoped that B.1.351 infection would trigger strong immune responses, but she was open to the possibility that this variant might be less visible to the immune system than are other strains. To find out, her team analysed antibodies from 89 people who had been hospitalized with B.1.351 infections. The researchers used a pseudovirus  a modified form of HIV that infects cells using the SARS-CoV-2 spike protein  to measure the capacity of the antibodies to block infection.

Reassuringly, people who recovered from B.1.351 infection made as many antibodies as did those infected with earlier circulating variants. Those antibodies did a good job of blocking pseudoviruses with B.1.351 mutations. To Moores surprise, the antibodies also blocked other strains. These included some that were similar to the ones that B.1.351 displaced, and an immune-evading variant called P.1, identified in Brazil, that shares several mutations in common with B.1.351. Sigals team reported similar results last month3.

Moore does not know why B.1.351 infection results in a such a broad immune response, but she is working to find out. 'Its about the only thing I think about these days,' she says. Its possible that the antibodies are recognizing features of the viral spike protein that do not differ between those variants.

The results are a boost to nascent efforts to develop vaccines able to cope with variants such as B.1.351. Last week, updated versions of Modernas vaccine, based on the genetic sequence of the B.1.351 variant, were given to trial participants for the first time. Other developers, including Pfizer and BioNtech, also plan to trial vaccines based on B.1.351s genetic sequence. 'I think theres a good possibility those vaccines might perform slightly better,' Moore says.

Different coronavirus variants can trigger different immune responses, and researchers are only beginning to map their full diversity. Infection with the UKs fast-spreading variant, known as B.1.1.7, seems to provoke antibodies that do a poor job against B.1.351 and earlier variants6, according to work led by immunologist George Kassiotis, at the Francis Crick Institute in London, and virologist Eleni Nastouli, at University College London.

Again, its not clear why B.1.1.7 seems to generate a narrow immune response. The variant is handled by existing vaccines  which are based on the virus that emerged in Wuhan, China, in late 2019  but researchers urgently need to determine whether vaccines based on B.1.351 can also cope with B.1.1.7, says Kassiotis. If not, future vaccines might need to immunize simultaneously against multiple variants, in a similar way to seasonal influenza jabs.

Redesigning vaccines is not necessarily the only way to cope with emerging coronavirus variants. Researchers are identifying other factors that could make existing vaccines more resilient, such as mimicking how natural immunity caused by infection can sometimes offer broad protection. For instance, Bieniaszs team found that some people who recover from COVID-19 make antibodies that, over time, become more capable of blocking diverse coronavirus variants7.

Antibody-producing B-cells can evolve through natural selection to make antibodies that bind more tightly to their target, a process known as maturation. Bieniaszs team isolated B-cells, several months apart, from people who had recovered from infection, and looked at how the potency of individual antibodies changed as the B-cell lineages that made them matured over time.

In some instances, matured antibodies recognized coronavirus variants, including B.1.351, that earlier versions of these antibodies failed to recognize. One type of matured antibody could even neutralize distantly related coronaviruses. 'The more mature an antibody response is, in terms of having gone through the selection process, the better it is able to cope with things like variants,' says Bieniasz.

Its not obvious how to make vaccines trigger such antibodies. Maturation occurs when viral molecules called antigens, which are recognized by antibodies, persist in the body. 'Really, the way to drive the process is to have the antigen be as persistent as possible,' says Bieniasz. Formulating vaccines with adjuvants  foreign molecules that increase their potency  might be one way to achieve this.

Some of the vaccines that have been administered to millions of people might already be triggering variant-resilient immune responses. In another March preprint, a long-running COVID-19 study in Seattle, Washington, reported that after receiving a single dose of an mRNA vaccine, participants who had previously been infected with SARS-CoV-2 produced heaps of antibodies that can neutralize B.1.351, as well as an earlier circulating variant8. Those people also produced much higher levels of antibodies than typically seen even in those who have received two vaccine doses.

Leonidas Stamatatos, an immunologist at the Fred Hutchinson Cancer Research Center (FHCRC) in Seattle who co-led the study, suspects that a single vaccine dose boosted the levels of pre-existing antibodies that were capable of recognizing diverse variants. Its not clear how to mimic this response in people who havent had COVID-19. One possibility is that a lag of several months between infection and vaccination was responsible, and that its effect could be replicated with another vaccine dose, given six months or a year after the first two, says Andy McGuire, an FHCRC immunologist who co-led the study.

By showing such a broad immune response to variants, the latest data have many researchers cautiously optimistic that vaccines will be able to protect against a breadth of variants. 'I think its very good news in terms of a path towards better vaccines,' says Morgane Rolland, a virologist at the Henry M. Jackson Foundation for the Advancement of Military Medicine who works at the Walter Reed Army Institute of Research in Silver Spring, Maryland.

And the fact that the virus is repeatedly developing the same immune-evading mutations could mean that its spike protein has limited capacity for change, Rolland adds.

Moore isnt so sure. Given enough time, 'I have infinite faith in the ability of a virus to escape an immune response,' she says. 'We've got to lower the global number of infections to the point where the virus doesnt have as many opportunities to escape.'