New versions of Omicron are masters of immune evasion 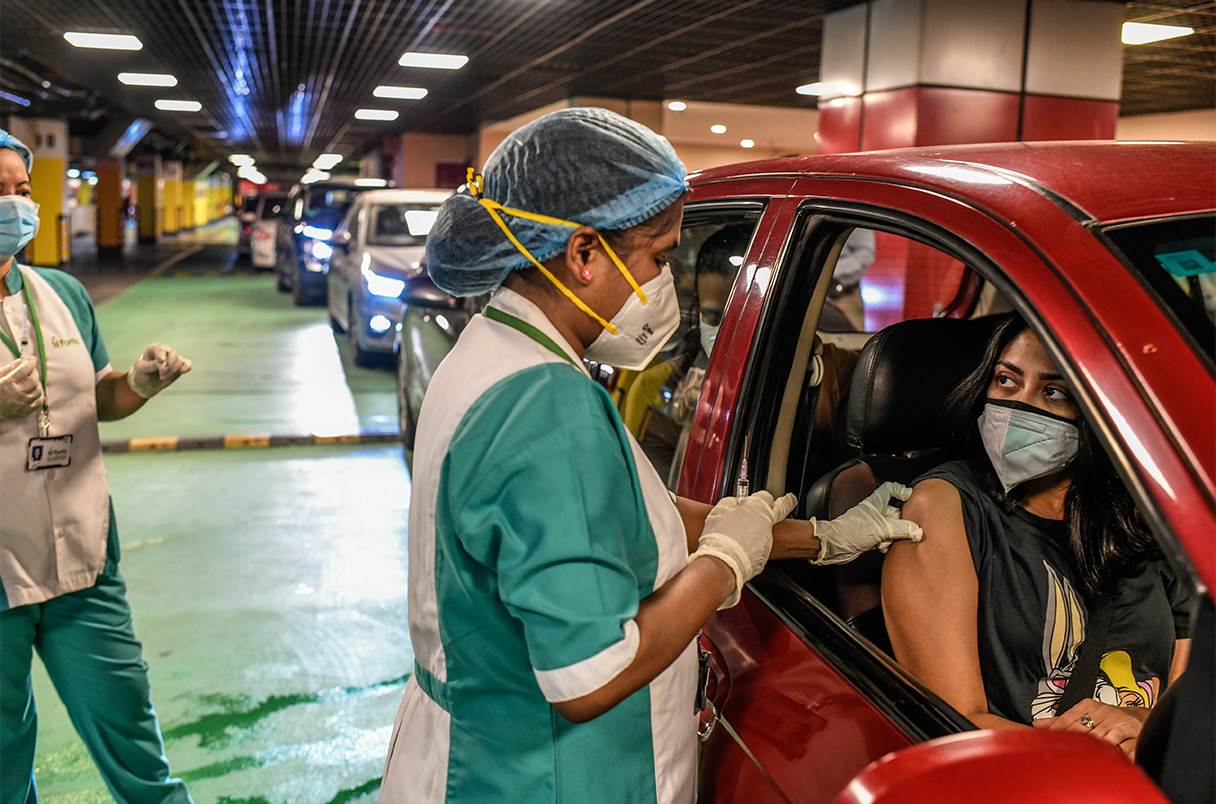 A woman receives a COVID-19 vaccine in New Delhi in June 2021. The continuing evolution of SARS-CoV-2 is a challenge for vaccine developers.ATUL LOKE/PANOS PICTURES/REDUX

Once again, South Africa is at the forefront of the changing COVID-19 pandemic. Epidemiologists and virologists are watching closely as cases there rise sharply again, just 5 months after the Omicron variant caused a dramatic surge. This time, the drivers are two new subvariants of Omicron named BA.4 and BA.5, which the Network for Genomic Surveillance in South Africa first detected in January.

The new strains didnt have much of an impact initially, but over the past few weeks case numbers in South Africa jumped from roughly 1000 per day on 17 April to nearly 10,000 on 7 May. A third subvariant called BA.2.12.1 is spreading in the United States, driving increases along the East Coast.

Its still unclear whether the new subvariants will cause another global COVID-19 wave. But like the earlier versions of Omicron, they have a remarkable ability to evade immunity from vaccines, previous infection, or botha disturbing portent for the future of the pandemic and a potentially serious complication for vaccine developers.

In most cases, vaccination or earlier infection still seem to provide protection from severe disease. 'Theres no reason to freak out,' says John Moore, an immunologist at Weill Cornell Medicine. The new strains are 'an additional hassle,' he says, but 'theres no indication that theyre more dangerous or more pathogenic.'

Hospitalizations in South Africa, for example, have increased, 'but because it is starting from a very low level, its not cause for alarm,' says virologist Tulio de Oliveira of Stellenbosch University, who helped identify BA.4 and BA.5. Numbers of patients in intensive care units are as low as they have been since the start of the pandemic, he says. 'At the moment, we expect something similar to the Omicron BA.1 wave,' when hospitalization rates stayed manageable.

The new superspreaders do, however, showcase the restless virus ability to find ways around the 'immunity wall' built up over the past 2 years and to continue to circulate at high levels. Even if the new variants cause relatively little severe disease, 'its a numbers game,' says Leif Erik Sander, an infectious disease expert at the Charité University Hospital in Berlin; enough new infections could still overwhelm health systems.

All three new strains share key mutations with the BA.2 strain of Omicron, which, like BA.1, emerged in southern Africa in October 2021. Initial studies by de Oliveira and Alex Sigal, an infectious disease expert at the Africa Health Research Institute in Durban, suggest BA.4 and BA.5 can elude the immunity of patients who were infected with the BA.1 strain, which in South Africa caused a much larger wave than BA.2. That may be in part because immunity has waned since South Africas BA.1 wave peaked in December. People who were both vaccinated and infected had somewhat stronger protection, de Oliveira and Sigal reported in a 2 May preprint.

All three new variants have mutations that alter a key amino acid called L452, which may help explain their ability to dodge immunity. L452 is part of the receptor-binding domain, the part of the spike protein that locks onto cells, enabling infection. The domain is also a key target for protective antibodies.

The Delta variant that caused devastating surges around the world in 2021 had mutations in L452 as well, so many scientists have been watching this hot spot carefully, including immunologist Yunlong Richard Cao of Peking University. On 11 April, Cao says, he and his colleagues noticed a pattern: New Omicron sublineages from New York, Belgium, France, and South Africa all had changes in L452. 'The independent appearance of four different mutations at the same site? Thats not normal,' Cao says. The researchers suspected it was the virus response to the high levels of immunity generated by the huge Omicron waves.

They immediately started to make copies of the spike protein based on the new sequences and test how well different antibodies could block those proteins, preventing them from binding to cells. They used sera from 156 vaccinated and boosted subjects, including some who had recovered from either BA.1 or severe acute respiratory syndrome (SARS), the coronavirus disease that caused a deadly global outbreak almost 2 decades ago. Like the South African team, they found that blood from patients who had been infected with BA.1 had only weak ability to neutralize BA.4 and BA.5; the same was true for BA.2.12.1. Even less effective were sera from people who had previously been infected with SARS and then vaccinated against COVID-19, they reported in a 2 May preprint.

The latter finding was surprising. Previous work by Linfa Wang, a bat coronavirus researcher at the Duke-NUS Medical School in Singapore, had shown patients who had recovered from SARS and were then vaccinated had strong protection against earlier SARS-CoV-2 variantsand even some related animal virusesa finding that seemed to hold clues to developing vaccines effective against multiple coronaviruses, including those that might trigger the next pandemic. But the new mutations apparently helped the Omicron subvariants evade those previously powerful antibodies.

Wang notes, however, that the subjects in the new study were all vaccinated with CoronaVac, a Chinese vaccine made from inactivated virus. Subjects in his study were vaccinated with messenger RNA (mRNA) vaccines, which might provide a more potent response to the new strains, he says. But Wang agrees that Omicrons knack for immune escape is dramatic. Based on its immunological profile, it 'should be called SARS-3,' he saysan entirely distinct virus.

Omicrons rapid evolution creates difficult decisions for vaccine- and policymakers about whether to shift to a new set of vaccines or stick with the current formulations, which are based on the virus that emerged in Wuhan, China, more than ?2 years ago. Moderna has tested two versions of its mRNA vaccine, containing the ancestral strain and either the Beta variantwhich spread in South Africa for a while in 2021 but is now goneor the Omicron BA.1 variant. The company has not yet reported data on how well they might protect against the new subvariants.

Pfizer, the other mRNA vaccine producer, has tested the efficacy of a booster and a primary vaccine based on BA.1. Results are expected by the end of June. The U.S. Food and Drug Administration has scheduled a meeting for 28 June to analyze available data and make vaccine recommendations for the fall.

The limited protection that BA.1 infection provided against the new subvariants in lab studies has already raised questions about how useful the new Omicron-specific vaccines might be. Wang says the virus is evolving too quickly for strain-specific vaccines to keep up. Instead, a broad cocktail of monoclonal antibodies targeting different strains might be the best way forward, he says.

Such a shot could prevent infections for several months in those vulnerable to severe disease, including immunocompromised people who dont respond to vaccines. Protecting that group is crucial, he notes, because many researchers suspect new variants emerge during long-term infections in people whose immune systems fail to clear the virus. The main hurdle, Wang says, is cost: A dose of monoclonal antibodies is about $1000 per patient, he notes, 'but if someone could find a way to lower that to $50 or $100,' the approach could be cheaper than constantly updating vaccines.

Kristian Andersen, who studies viral evolution at Scripps Research, draws a sobering lesson from the newest Omicron variants. Although we dont know what future variants will look like, he says, 'we can be certain that theyll continue to be more and more capable of immune escape,' possibly leading to lower protection against not just infection, but also against severe disease. 'We need to focus on broadening our immunity,' he says.

Its far from clear what kind of vaccine might prompt that broadened immunity, but 'we really, really need to get going' to figure that out, Andersen says. 'Simply letting the virus do what viruses docontinue to infect us, and likely several times a yearjust isnt an option in my playbook.'