The MRC has established a new high-profile R190 million funding opportunity for Medical Schools and Universities to undertake 'Flagship Projects' aimed at addressing South Africa's key health problems. The winning projects, led by some of South Africa's most accomplished scientists, were announced at a media briefing at the MRC in Cape Town on Wednesday evening. 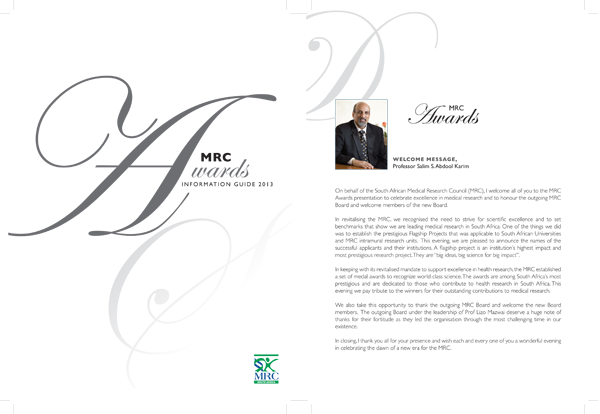 The introduction of these high impact flagship projects to undertake large scale projects comes after National Treasury provided funding to the MRC under its Economic Competitiveness and Support Package to support the rejuvenation of medical research in South Africa.

A total of R150 million, over three years, has been granted to twelve projects at Universities across the country whilst five MRC intramural projects have been granted R40 million over the same period. All seventeen of these projects address the health priorities of the nation and aim to place South African medical research and innovation at the highest platform globally.

'University professors were complaining that they couldn't do the research they needed to do,' said MRC President Professor Salim Abdool Karim at the media briefing attended by dignitaries and world renowned scientists. 'And so this money is for the revitalisation of medical research in South Africa. We want our universities to be the best in the world.'

The MRC received 29 applications for Flagship projects from 18 Universities. The applications were then subjected to rigorous international peer-review, which led to 12 of the Universities (66%) being successful. About two out of every five applications (about 40%) were successful, indicating just how competitive it is to get one of these grants. The grants provide about R16million for a large project and R8million for a moderately large research project.

The research programme areas of these flagship projects cover a wide number of disease areas including HIV, Tuberculosis, Malaria, Burden of Disease, Cardiovascular and Metabolic Disease, Alcohol and Drug Abuse and Women's Health; areas of health that present a major challenge in South Africa.

'There is a need for research to be conducted locally,' said Minister of Health, Dr Aaron Motsoaledi, 'and these flagship projects will address this urgent need and show the world that we can also produce world-class scientists.'