Here we provide you with sections from our open access annual reports, which are directed at public health practitioners, policies makers, doctors, researchers and the general public.
The objective of these reports is to present the key aspects of our work in an accessible, summarized format. The majority of the work presented has been published in peer-reviewed publications and can be seen in the publications section of krisp.org.za. 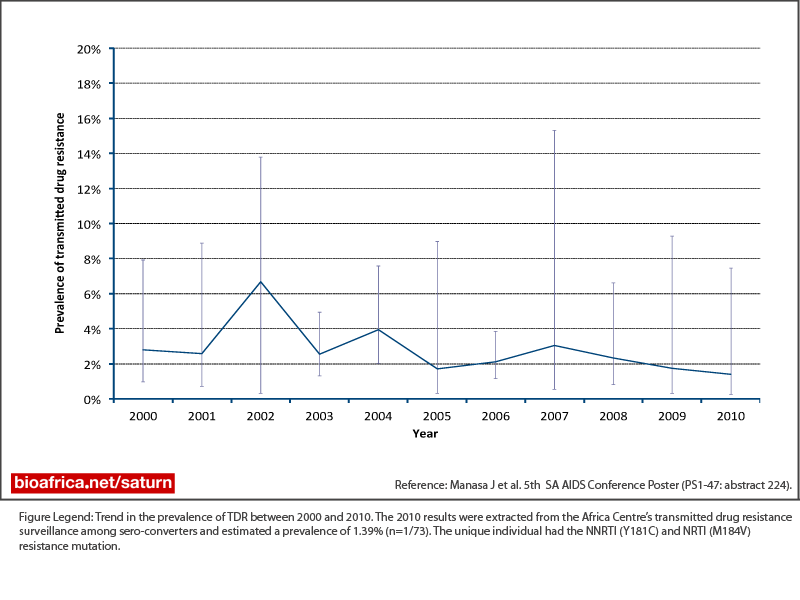 A literature review and data mining exercise was carried out to determine the temporal trends in TDR in South Africa. In addition, 72 sequences from seroconvertors identified from Africa Centre's 2010 HIV surveillance round were also examined for TDR. Publicly available data on TDR were retrieved from Genbank, curated in RegaDB and analyzed using the Calibrated Population Resistance Program.

There was no evidence of TDR from the 2010 rural KwaZulu Natal samples. Ten datasets with a total of 1618 sequences collected between 2000 and 2010 were pooled to provide a temporal analysis of TDR. The year with the highest TDR rate was 2002 (6.67%, 95% confidence interval (CI): 3.09-13.79%; n: 6/90). After 2002, TDR levels returned to <5% (WHO low-level threshold) and showed no statistically significant increase in the interval between 2002 and 2010. The most common mutations were associated with NNRTI resistance, K103N, followed by Y181C and Y188C/L. Five sequences had multiple resistance mutations associated with NNRTI resistance.

There is no evidence of TDR in rural KwaZulu-Natal. TDR levels in South Africa have remained low following a downward trend since 2003. Continuous vigilance in monitoring of TDR is needed as more patients are initiated and maintained onto antiretroviral therapy.