Dr Justen Manasa graduated with a PhD after completing ground-breaking research in the Hlabisa District of KwaZulu-Natal that resulted in a low cost genotyping method envisaged to help doctors monitor and evaluate drug resistance among HIV-infected patients in resource-limited settings. 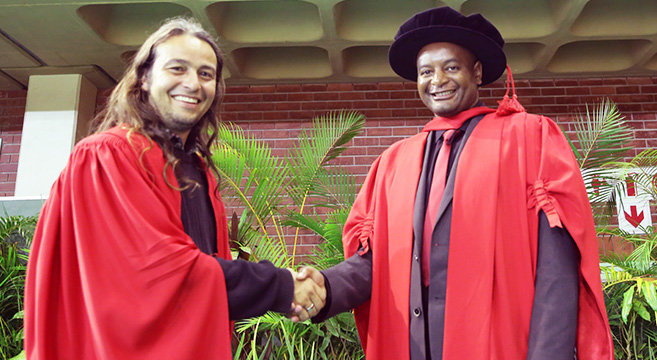 Because HIV drug resistance has the potential to derail the progress made in the efforts to control the epidemic, Manasa said it was important to continuously survey and monitor drug resistance in naive patients and patients failing therapy.

'Unfortunately most of the methods used are expensive to implement, especially in the context of the magnitude of the HIV epidemic in sub-Saharan Africa', said Manasa.

He said the numbers of patients accessing HIV-1 antiretroviral (ARV) treatment in resource-limited settings had increased exponentially over the past decade. This was accompanied by significant improvements in the quality of life and life expectancy of the patients who are already infected, however, the emergence and spread of HIV-1 drug resistance had the potential to reverse all the efforts made by scientists thus far.

His study resulted in the development of a free and open source bioinformatics drug resistance database and a low cost HIV drug resistance genotyping method for resource-limited settings, which he says are freely available on the website: www.bioafrica.net

'The genotyping method and database are currently being used in ARV treatment and scientific research programmes in Botswana, South Africa and Zimbabwe.'

His PhD resulted in the publication of eight manuscripts in peer-reviewed journals, of which five were first author publications. He says he was also fortunate to present some of the work in a plenary session at the International AIDS Conference in Washington, D.C. in 2012.

'I really enjoyed the study's multidisciplinary nature encompassing molecular virology, bioinformatics and epidemiology. I was also happy the results could be translated to better management of patients failing antiretroviral therapy and that it addressed policy relevant research questions in the African fight against HIV and AIDS.'

Born in Zimbabwe, Manasa said he was very passionate about science and would like to better understand the causes and consequences of HIV drug resistance at individual and population levels in Africa.

'UKZN provides a unique environment of scholarship that enables one to answer policy relevant research questions using the most advanced tools under the mentorship of world leading researchers. At the moment I am excited about the new research hub at the Nelson R Mandela School of Medicine comprising K-RITH, HPP, CAPRISA and the Africa Centre.'