By John Cohen, Science, 12 June 2015. New studies could aid public health efforts. Last week at the New York Academy of Sciences in New York City, researchers, public health specialists, and HIV/AIDS advocates discussed how to exploit the potential of the technique, called phylogenetic analysis - and the thorny ethical and legal issues it raises...

The very trait that makes HIV so good at dodging the immune system and at thwarting efforts to develop an effective vaccine might also turn out to be an Achilles' heel. 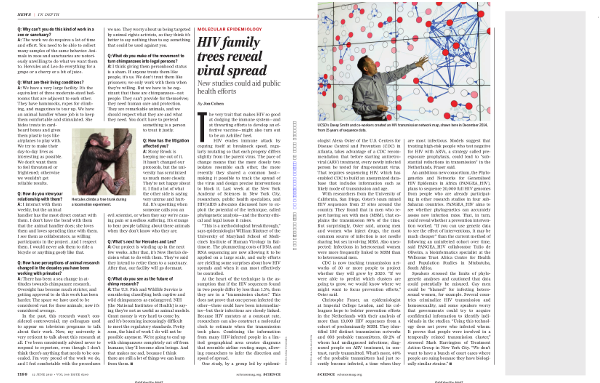 HIV evades immune attack by copying itself at breakneck speed, regularly mutating so that each progeny differs slightly from the parent virus. The pace of change means that the more closely two isolates resemble each other, the more recently they shared a common host' making it possible to track the spread of the virus and design precise interventions to block it. Last week at the New York Academy of Sciences in New York City, researchers, public health specialists, and HIV/AIDS advocates discussed how to exploit the potential of the technique, called phylogenetic analysis'and the thorny ethical and legal issues it raises.

'This is a methodological breakthrough,' says epidemiologist William Blattner of the University of Maryland School of Medicine's Institute of Human Virology in Baltimore. The plummeting costs of DNA and RNA sequencing are now allowing it to be applied on a large scale, and early efforts are yielding some surprises about how HIV spreads and when it can most effectively be controlled.

At the heart of the technique is the assumption that if the HIV sequences found in two people differ by less than 1.5%, then they are in a 'transmission cluster.' This does not prove that one person infected the other'there could have been intermediaries but their infections are closely linked. Because HIV mutates at a constant rate, researchers can also construct a molecular clock to estimate when the transmission took place. Combining the information from many HIV-infected people in a limited geographical area creates diagrams that resemble airline routing maps, allowing researchers to infer the direction and speed of spread.

One study, by a group led by epidemiologist Alexa Oster of the U.S. Centers for Disease Control and Prevention (CDC) in Atlanta, takes advantage of a CDC recommendation that before starting antiretroviral (ARV) treatment, every newly infected person be tested for drug-resistant virus. That requires sequencing HIV, which has enabled CDC to build an anonymized database that includes information such as likely mode of transmission and age.

With researchers from the University of California, San Diego, Oster's team mined HIV sequences from 27 sites around the country. They found that in men who report having sex with men (MSM), that explains the transmission 88% of the time. But surprisingly, Oster said, among men and women who inject drugs, the most common source of infection is not needle sharing but sex involving MSM. Also unexpected: Infections in heterosexual women were more frequently linked to MSM than to heterosexual men.

CDC is now tracking transmission networks of 30 or more people to project whether they will grow by 2020. 'If we were able to predict which clusters are going to grow, we would know where we might want to focus prevention efforts,' Oster said.

Christophe Fraser, an epidemiologist at Imperial College London, and his colleagues hope to bolster prevention efforts in the Netherlands with their analysis of more than 13,000 HIV sequences from a cohort of predominantly MSM. They identified 106 distinct transmission networks and 883 probable transmitters, 69.2% of whom had undiagnosed infections; diagnosed people on ARV treatment, in contrast, rarely transmitted. What's more, 40% of the probable transmitters had just recently become infected, a time when they are most infectious. Models suggest that treating high-risk people who test negative for HIV with ARVs, a strategy called preexposure prophylaxis, could lead to 'substantial reductions in transmission' in the Netherlands, Fraser said.

An ambitious new consortium, the Phylogenetics and Networks for Generalised HIV Epidemics in Africa (PANGEA_HIV), plans to sequence 20,000 full HIV genomes from people who are already participating in other research studies in four subSaharan countries. PANGEA_HIV aims to see whether phylogenetics can accurately assess new infection rates. That, in turn, could reveal whether a prevention intervention worked. 'If you can use genetic data to see the effect of interventions, it may be much cheaper' than the current method of following an uninfected cohort over time, said PANGEA_HIV collaborator Tulio de Oliveira, a bioinformatics specialist at the Wellcome Trust Africa Centre for Health and Population Studies in Mtubatuba, South Africa.

Speakers stressed the limits of phylogenetic analyses and cautioned that data could potentially be misused. Gay men could be 'blamed' for infecting heterosexual women, for example. Several countries criminalize HIV transmission and homosexuality, and some speakers worry that governments could try to acquire confidential information to identify individuals in the studies. 'Using this technology does not prove who infected whom: It proves that people were involved in a temporally related transmission cluster,' stressed Mark Harrington of Treatment Action Group in New York City. 'We don't want to have a bunch of court cases where people are suing because they have biologically similar strains.'