In this report, UNAIDS is announcing that 18.2 million people now have access to HIV treatment. The Fast-Track response is working. Increasing treatment coverage is reducing AIDS-related deaths among adults and children. But the life-cycle approach, which highlight our phylogenetics manuscript (de Oliveira et al. Lancet HIV 2016), has to include more than just treatment. 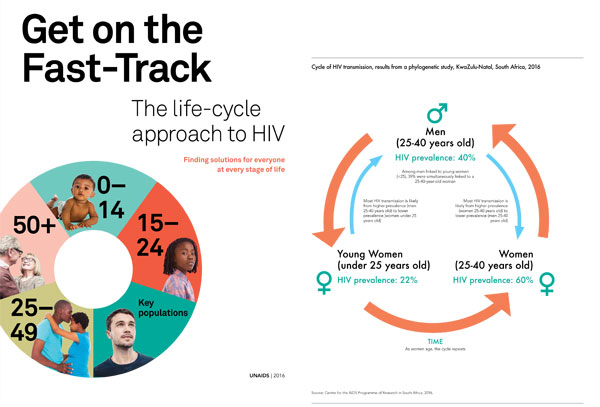 Download the full report, which review our HIV-1 phylogenetic results with CAPRISA.

WINDHOEK/GENEVA, 21 November 2016 A new report by UNAIDS shows that countries are getting on the Fast-Track, with an additional one million people accessing treatment in just six months (January to June 2016). By June 2016, around 18.2 million [16.1 million 19.0 million] people had access to the life-saving medicines, including 910 000 children, double the number five years earlier. If these efforts are sustained and increased, the world will be on track to achieve the target of 30 million people on treatment by 2020.

Get on the Fast-Track: the life-cycle approach to HIV was launched today in Windhoek, Namibia, by the President of Namibia, Hage Geingob and the Executive Director of UNAIDS, Michel Sidibe. 'Just under two years ago, 15 million people were accessing antiretroviral treatment today more than 18 million are on treatment and new HIV infections among children continue to fall,' said President Geingob. 'Now, we must ensure that the world stays on the Fast-Track to end the AIDS epidemic by 2030 in Namibia, in Africa and across the world.'

The report contains detailed data on the complexities of HIV and reveals that girls transition to womanhood is a very dangerous time, particularly in sub-Saharan Africa. 'Young women are facing a triple threat,' said Mr Sidibe. 'They are at high risk of HIV infection, have low rates of HIV testing, and have poor adherence to treatment. The world is failing young women and we urgently need to do more.'

HIV prevention is key to ending the AIDS epidemic among young women and the cycle of HIV infection needs to be broken. Recent data from South-Africa shows that young women are acquiring HIV from adult men, while men acquire HIV much later in life after they transition into adulthood and continue the cycle of new infections.

The report also shows that the life-extending impact of treatment is working. In 2015, there were more people over the age of 50 living with HIV than ever before 5.8 million. The report highlights that if treatment targets are reached, that number is expected to soar to 8.5 million by 2020. Older people living with HIV, however, have up to five times the risk of chronic disease and a comprehensive strategy is needed to respond to increasing long-term health-care costs.

The report also warns of the risk of drug resistance and the need to reduce the costs of second- and third-line treatments. It also highlights the need for more synergies with tuberculosis (TB), human papillomavirus (HPV) and cervical cancer, and hepatitis C programmes in order to reduce the major causes of illness and death among people living with HIV. In 2015, 440 000 of the 1.1 million people who died from an AIDS-related illness died from TB, including 40 000 children.

'The progress we have made is remarkable, particularly around treatment, but it is also incredibly fragile,' said Mr Sidibe. 'New threats are emerging and if we do not act now we risk resurgence and resistance. We have seen this with TB. We must not make the same mistakes again.'

Get on the Fast-Track: the life-cycle approach to HIV outlines that large numbers of people at higher-risk of HIV infection and people living in high-burden areas are being left without access to HIV services at critical points in their lives, opening the door to new HIV infections and increasing the risk of dying from AIDS-related illnesses. The report examines the gaps and approaches needed in HIV programming across the life cycle and offers tailored HIV prevention and treatment solutions for every stage of life.

"Ending AIDS is possible only if we join hands by each doing what is within our scope, creatively and aggressively embracing the 90 90 90 targets," said Eunice Makena Henguva, Youth Economic Empowerment Project Officer for the Namibian Women's Health Network.

The report highlights that of the 150 000 children who were newly infected with HIV in 2015, around half were infected through breastfeeding. It stresses that infection through breastfeeding can be avoided if mothers living with HIV are supported to continue taking antiretroviral medicines, allowing them to breastfeed safely and ensure that their children receive the important protective benefits of breastmilk.

Testing also remains a major issue. The report shows that only four of 21 priority countries in Africa provided HIV testing for more than half the babies exposed to HIV within their first weeks of life. It also shows that in Nigeria, which accounts for more than a quarter of all new HIV infections among children globally, only half of pregnant women living with HIV are tested for HIV.

Get on the Fast-Track: the life-cycle approach to HIV stresses that more efforts are needed to expand HIV testing for pregnant women, expand treatment for children and improve and expand early infant diagnosis by using new diagnostic tools and innovative methods, such as SMS reminders, to retain mothers living with HIV and their babies in care.

The report also encourages countries to adopt the targets of the Start Free, Stay Free, AIDS Free framework led by UNAIDS and the United States President s Emergency Plan for AIDS Relief to reduce the number of new HIV infections among children, adolescents and young women, and ensure lifelong access to antiretroviral therapy if they are living with HIV.

The report shows that the ages between 15 and 24 years are an incredibly dangerous time for young women. In 2015, around 7500 young women became newly infected with HIV every week. Data from studies in six locations within eastern and southern Africa reveal that in southern Africa girls aged between 15 and 19 years accounted for 90% of all new HIV infections among 10 19-year-olds, and more than 74% in eastern Africa.

Many children who were born with HIV and survived are now entering adulthood. Studies from 25 countries in 2015 show that 40% of young people aged between 15 and 19 years became infected through mother-to-child transmission of HIV. This transition is also magnifying another major challenge high numbers of AIDS-related deaths among adolescents. Adolescents living with HIV have the highest rates of poor medication adherence and treatment failure.

A range of solutions are needed to respond to the specific needs of adolescents, including increased HIV prevention efforts, keeping girls and boys in school, increasing HIV testing and voluntary medical male circumcision, pre-exposure prophylaxis and immediate access to antiretroviral therapy.

In 2014, an estimated 45% of all new HIV infections globally were among members of key populations and their sexual partners. The report warns that new HIV infections are continuing to rise among people who inject drugs (by 36% from 2010 to 2015) and among gay men and other men who have sex with men (by 12% from 2010 to 2015) and are not declining among sex workers or transgender people.

In July 2016, in the HIV prevention gap report, UNAIDS warned that HIV prevention efforts are not working for adults and that new HIV infections among adults have failed to decline for at least five years. Get on the Fast-Track: the life-cycle approach to HIV cites concerns that western and central Africa is off-track in responding to HIV. The region accounts for 18% of people living with HIV, but a serious lack of access to treatment means that the region accounts for 30% of all AIDS-related deaths globally.

The report sheds new light on HIV infection and treatment among adult men, showing that men are much less likely to know their HIV status and access treatment than women. One study in KwaZulu-Natal, South Africa, showed that just 26% of men were aware of their HIV status, only 5% were on treatment and that the viral load among men living with HIV was extremely high, making onward transmission of the virus much more likely.

Get on the Fast-Track: the life-cycle approach also shows that around 100 000 people in low- and middle-income countries aged 50 years and over are estimated to newly acquire HIV every year, confirming the need to include older people in HIV prevention, as well as treatment, programming.

As people living with HIV grow older, they are also at risk of developing long-term side-effects from HIV treatment, developing drug resistance and requiring treatment of co-morbidities, such as TB and hepatitis C, which can also interact with antiretroviral therapy. Continued research and investment is needed to discover simpler, more tolerable treatments for HIV and co-morbidities and to discover an HIV vaccine and cure.

Finding solutions for everyone at every stage of life

The report concludes that investments must be made wisely across the life cycle, using a location population approach to ensure that evidence-informed, high-impact programmes are available in the geographical areas and among the populations in greatest need.

It strongly urges countries to continue to Fast-Track HIV prevention, testing and treatment in order to end the AIDS epidemic as a public health threat by 2030 and ensure that future generations are free from HIV.

New phylogenetic data from South Africa (de Oliveira et al. Lancet HIV 2016) reveal a vicious cycle of HIV infection among older and younger people that may be at play in many high-prevalence settings: young women are acquiring HIV from adult men'as these young women grow older, they tend to transmit HIV to adult men, and the cycle repeats. Data from other studies suggest that gender inequalities and harmful masculinities underpin this cycle. Lower access to education, lower levels of economic independence and intimate partner violence erode the ability of young women to negotiate safer sex and retain control of their bodies. Men, meanwhile, tend to be ignored by health policies and HIV strategies, they seek services infrequently, and they tend to be diagnosed with HIV and initiate treatment very late - often with deadly consequences.