By Professor Ayesha Kharsany, December 1, 2016, Durban - Globally, over 1.6 billion people are in the age group 12-24 years, the largest generation of adolescents and young people. However, almost 42% of new HIV infections occur in this age group, nearly 80% of these live in sub-Saharan Africa and more than 70% of these infections occur in adolescent girls and young women. Not only do these adolescent girls and young women have higher rates of HIV, they also acquire infection 5-7 years earlier than their male peers. 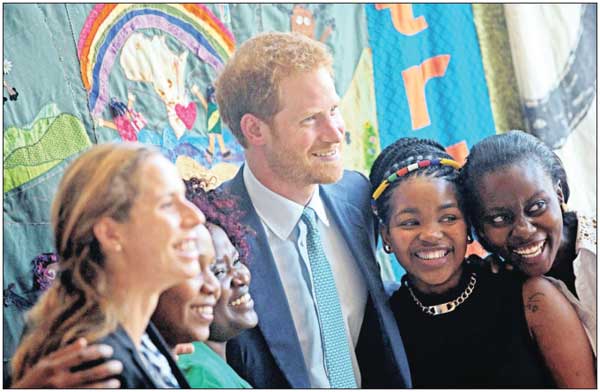 Britain's Prince Harry meets HIV youth activists at the 2016 International Aids Conference at the Durban International Conference Centre, in July. Studies suggest that age-disparate heterosexual relationships may play a role in the prevalence of HIV among teenage girls and young women.

Worldwide there are some declining trends in HIV infections in the 15-24 year age group with simultaneous behaviour changes such as waiting longer to become sexually active, having fewer multiple sex partners and an increased use of condoms in multiple partnerships. However, in South Africa the declines in the number of HIV positive young women are too slow and too little, with similarly low levels of behaviour change. For example the results from the National South African Household HIV Survey conducted in 2012 showed 11.4% of young women compared to 2.9% of boys in the 15-24 year age group were HIV positive, whilst in the 2008 survey, 13.9% of young women compared to 3.6% of young boys were HIV positive. These differences are minor.

Despite high levels of knowledge on HIV prevention and transmission, adolescent girls and young women are a key population who remain highly vulnerable to HIV. A key gateway to HIV prevention and treatment is knowledge of HIV status and this remains low in South Africa. This disconnect is related to the low risk perception, perpetuates vulnerability to HIV within challenging environments of high levels of household poverty and unemployment that are complexly linked to embedded gender inequalities, gender based violence, harmful gender norms, patriarchy and premature attrition from schools that limit young women and girls from reaching their full potential.

The persistently high gender imbalance of HIV amongst young people has led to an increase in research to better understand the disparate burden and associated risks facing adolescent girls and young women. Increasing attention has been paid to the role that age-disparate heterosexual relationships may play in this gender imbalance. Several studies across a variety of settings have shown that larger age differences among sex partners are associated with lower condom use and higher rates of sexually transmitted infections among adolescent girls and young women. Recent data from the third National HIV Communication Survey conducted in 2012 suggest that women aged 16-24 years in age-disparate partnerships were more likely to report unprotected sex, amplifying transmission risk. In contrast another study from the same region, however, found that age-disparate partnerships did not predict HIV acquisition among young women in KwaZulu-Natal, South Africa.

The study from the Centre for the AIDS Programme of Research in South Africa (CAPRISA) provides new evidence and sheds light on why young women in South Africa are at high risk of HIV infection (de Oliveira et al. Lancet HIV 2016). A large study undertaken between 2014 and 2015 involved nearly 10 000 randomly sampled people within two districts in the province KwaZulu-Natal between 2014 and 2015. The overall HIV prevalence among 15-49 year olds in these districts was 36% and as high as 66% among women in their thirties. The difference in HIV prevalence among men and women was greatest in the young age groups, reinforcing that women in this community on average acquire HIV at a younger age than men. The genetic sequences of the viruses from the HIV blood samples were analysed and this information was used to map the sexual partnerships among the people living with HIV to better understand the relentless spread of HIV in this community. A total of 90 clusters of probable male?female transmission were identified, and within those clusters were 123 women and 103 men. Among the women aged under 25 years, their sexual partners were on average 8.7 years older, with 62% of these men aged 25-40 years. Among the women aged 25-40 years, their sexual partners were on average just 1 year older. Among the men aged 25-40 years linked to a woman aged under 25 years, 39% were linked simultaneously to a woman aged 25-40 years. The most probable direction of transmission among these individuals was inferred by the levels of HIV prevalence within this community. HIV transmission was most likely to occur from high to low prevalence. Together, these data suggest that any men aged 25-40 years living with HIV may have acquired HIV from a woman aged 25-40 years, and that most of the younger women aged under 25 years living with HIV may have acquired HIV from a man aged 25-40 years. Over time, as the younger women grow older, this cycle is expected to continue. Greater understanding of the sexual networks driving HIV transmission could help in the design of programmes to reduce HIV infection in adolescent girls and young women.

This study revealed that the 'cycle of HIV transmission' heightening the vulnerability of adolescent girls and young women's to HIV is driven by high rates of new HIV infections from men, on average 8 years older. Many of these men were also partners of similarly aged women who have HIV prevalence rates exceeding 60%.

Young women are uniquely vulnerable to infection, and understanding the cycle of HIV transmission for this key population is a public health imperative, despite South Africa's substantial progress in the large scale roll-out of HIV prevention and treatment programmes. Several programmes such as DREAMS (Determined, Resilient, Empowered, AIDS-free, Mentored, and Safe Women) Partnership, Global Fund, Adolescent Girls and Young Women's Programme, Girl Effect and SheConquers are comprehensive evidence based programmes for adolescent girls and young women that aim to provide sexuality education, increase and retain girls in school, reduce teenage pregnancies and gender-based violence, increase economic opportunities for young people and most importantly interrupt the cycle of transmission and decrease new HIV infections.

This study provides scientific evidence, using state-of-the-art research technologies, to guide targeted HIV prevention interventions to break the cycle of HIV transmission and impact the course for HIV in South Africa and potentially in other high burden settings.