Three thousand people have died in Italy as a result of Covid-19, with more than 35000 infected. Three weeks ago, the country passed the 150 mark for infected people. It took three weeks to get to that number. In South Africa, we passed the 150 mark on Thursday, two weeks after the first local positive test. Mail and Guardian, 19 March 2020. 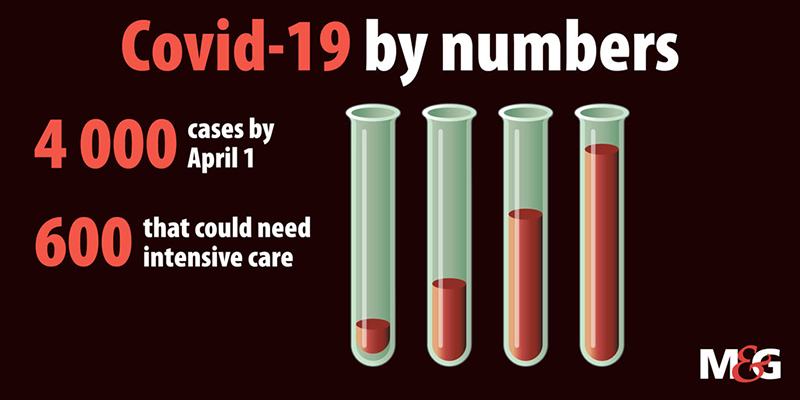 Mail & Guardian projections are that, by Monday, 400 people will be infected. At this rate, by April 1, there is a probability that there could be about 4000 cases with about 600 cases that would need intensive care.

Covid-19 spreads rapidly and, once testing expands to confirm what is happening, the numbers of confirmed infected people tends to explode. On Monday, Health Minister Zweli Mkhize said cases are doubling every two days, in line with what is happening in countries such as Spain and Italy.

This exponential growth only changes when government interventions and people's actions slow the spread, ensuring that each infected person infects fewer people. Changing the rate of spreading is why President Cyril Ramaphosa on Sunday declared a disaster. In the week since, ministers have changed and updated laws in a dramatic attempt to affect how quickly Covid-19 can spread.

On Wednesday, the DST-NRF Centre of Excellence Centre in Epidemiological Modelling and Analysis sent its rough projection to the M&G. This estimated that there is a 50% chance that the cumulative number of identified cases on April 1 could be between 949 and 2096 and at the outmost, there could be 3830 cases. This is assuming 'no major changes in the trajectory of the epidemic', so numbers could be lower or higher. 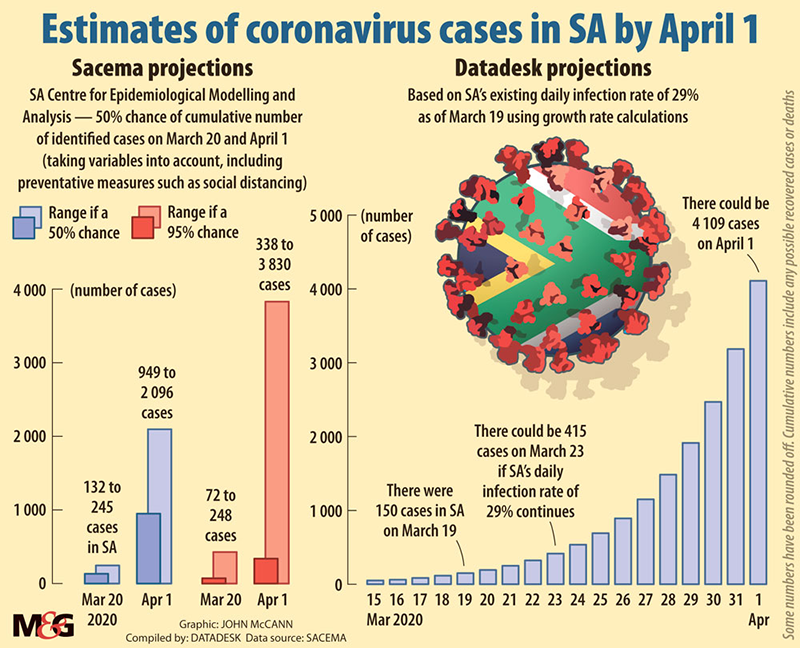 Dr Richard Lessells, an infectious diseases specialist at the University of KwaZulu-Natal, said projections are vital at this time. 'It's critical that you start to have an idea of what the state capacity is going to be for severe cases and the critical care capacity for the very severe cases. Because this is something that is moving so quickly.'

'Today we are in the position that Italy was in three weeks ago, and now they have over 1500 people in intensive care, on ventilators. So this is something where you don't have the luxury of time. You have to act quickly and you have to do that based on the best information and projections you can make and they will not be accurate, but you hope that they're accurate enough that your planning can be appropriate,' said Lesells.

That South Africa is different from Italy goes without saying  but where that country has a vulnerable, elderly population, this country has a large population of immunocompromised people and communities with widespread, existing upper respiratory tract infections because they breathe in such polluted air.

On Thursday, News24 reported that it had seen a copy of the projections that prompted the declaration of a national disaster. These showed that, without a dramatic response, anywhere between 87 900 and 351 000 people would die in South Africa as a result of Covid-19, with the health system getting overwhelmed. In the first number, 10% of the population was projected as infected, whereas the second comes if 40% of the population is infected.

M&G projections last week showed that between 665 and 12-million people could be infected in South Africa, depending on the rate that Covid-19 spreads. Mkhize said that the health department is working on the assumption that 15% of people end up in hospital. In other countries, the death rate has been about 1%, with older people more likely to die.

Covid-19 spreads quickly at first thanks to a mixture of one infected person being able to infect many people, because people aren't yet taking precautions, and an increase in the number of tests being done showing that spread.

This trajectory is changed when government and society changes how it does things. The Sunday declaration of a disaster was aimed at doing just that  stopping people from high-risk countries means fewer chances of infection from there, whereas social distancing and hand-washing mean people are less likely to get infected. The subsequent changes in local disaster regulations, such as bar hours changing and gatherings of more than 50 banned, are a first step, with a state of emergency the final step.

On Monday, Mkhize said: 'The next few weeks are critical. It will be on the basis of that situational analysis that the government will decide if the measures that have been put in place are sufficient or we may be required to take further steps, being guided by the country's legislation.'

Those steps have, in other countries, taken three weeks to have an effect on the infection rate. So, cases would still grow and then perhaps decrease from there.

In Gauteng, Premier David Makhura said this sort of reality meant that the government needed to use its response to Covid-19 to 'step up' its provision of basic services. This ranged from recruiting more tracers (people who work out who infected people have been in contact with) to securing more hospital beds. In consultations with the mining industry on Tuesday, the minerals department said the expertise there  and equipment  for dealing with tuberculosis would help the national health response.

Government is responding at speed to a crisis that has already overwhelmed wealthier countries with more resources. We will see in three weeks if these measures change the exponential growth trajectory that Covid-19 is currently on.

On Monday, Imperial College in London released its research on how Covid-19 spreads and modelled what that would look like in the United Kingdom and United States. They projected an unmitigated pandemic  much in the same way that the Mail & Guardian has done in the past week  where nothing changes its spread. In that case, 81% of people would be infected and 510000 would die in the UK, with 2.2-million dying in the US.

There are two fundamental strategies to change this trajectory: Suppression (reducing the number of people each infected person can infect by locking down entire groups of people) and Mitigation (allowing people to get sick and then trying to keep them alive, in the hope that more of your population gets healthy and builds a 'herd immunity').

Before quarantines, the researchers found that a third of transmission happens each in homes, schools and workplaces and then in the community.

The disease's incubation period is 5.1 days, and people are infectious 12 hours before the onset of symptoms. People who require critical care need 16 days in hospital, with 10 of those in ICU. Half of those who end up in critical care die.

The big assumption in the research is that, on recovery, people are immune to reinfection for the short-term.

The best solution, they concluded, seems to be a mix of approaches: case isolation (keeping infected people away from people who aren't infected), social distancing of the entire population and either household quarantine or school closure.

With no vaccine likely for at least 18 months, the researchers warn that this is uncharted terrain: 'It is not at all certain that suppression will succeed in the long term; no public health intervention with such disruptive effects on society has been attempted for such a long duration of time. How populations and societies will respond remains unclear.'  Sipho Kings