Scientists are scrambling to better understand effects of a series of worrisome mutations from in the U.K. and South Africa variants. 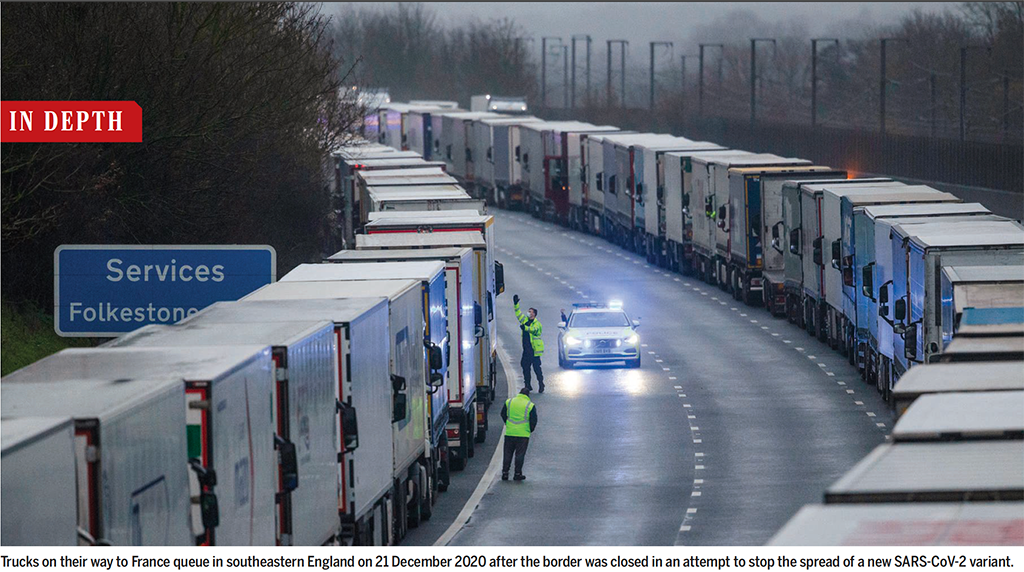 On 8 December 2020, a small group of scientists in the United Kingdom logged on for a regular Tuesday videoconference about the spread of the pandemic coronavirus. The discussion focused on Kent, a county in southeastern England that was seeing increasing transmission of SARS-CoV-2, even as the rest of the country was managing to curb the spread. Because investigations had not found any obvious causesno big workplace outbreaks or changes in people's behaviorseveral researchers had been asked to look at viral genomes from the region.

The genetic family tree they presented showed something unusual was going on, says one of the attendees, microbial genomicist Nick Loman of the University of Birmingham. Not only were half the cases in Kent caused by a specific variant of SARS-CoV-2, but its branch literally stuck out from the rest of the data. 'I've not seen a part of the tree that looks like this before,' Loman says. And when scientists compared how fast this variant, named B.1.1.7, and others were spreading, they made a startling discovery: The virus seemed to have become more adept at transmitting between people.

The discovery of the viral lineage, along with a similarly worrying one in South Africa, had a massive impact. On 19 December, U.K. Prime Minister Boris Johnson announced that London and southeastern England would be placed under tighter COVID-19 restrictions to contain the variant, which Johnson said may be 70% more transmissible. Although there's no evidence yet that the strain is more deadly, many countries closed their borders to travelers from the United Kingdom as they mulled how to deal with the possible new threat. Several announced they, too, had the variant among their populations.

As this issue of Science went to press on 23 December, scientists were still grappling to understand whether the variant really spreads faster, and if so, how. But its emergence had driven home the notion that viral evolution, which so far has had little impact on the trajectory of the COVID-19 pandemic, could yet result in nasty surprisesjust as the first effective vaccines are being rolled out. It also raises the question of whether those vaccines may need periodic updating to parry a changing virus.

The U.K. lineage of SARS-CoV-2 has apparently acquired 17 mutations that lead to amino acid changes in its proteins all at once, a feat never seen before in the coronavirus. Crucially, eight of them were in the gene that encodes spike, a protein on the viral surface that the pathogen uses to enter human cells. 'There's now a frantic push to try and characterize some of these mutations in the lab,' says Andrew Rambaut, a molecular evolutionary biologist at the University of Edinburgh.

Three already stand out as worrisome. A mutation named N501Y has previously been shown to increase how tightly spike binds to the angiotensin-converting enzyme 2 receptor, its main entry point into human cells. Scientists in South Africa were the first to spot N501Y's importance: They noted it several weeks ago in a lineage that is surging in the Eastern Cape, Western Cape, and KwaZulu-Natal provinces. 'We found that this lineage seems to be spreading much faster,' says Tulio de Oliveira, a virologist at the University of KwaZulu-Natal whose work alerted U.K. scientists to the mutation. That's concerning, says evolutionary biologist Jesse Bloom of the Fred Hutchinson Cancer Research Center: 'Anytime you see the same mutation being independently selected multiple times, it increases the weight of evidence that that mutation is probably beneficial in some way for the virus.'

B.1.1.7's second notable mutation, a deletion named 69-70del, leads to the loss of two amino acids in the spike protein. It, too, had appeared before: It was found, together with another mutation named D796H, in the virus of a COVID-19 patient in Cambridge, U.K., who was given plasma from recovered patients as a treatment, but eventually died. In lab studies, the patient's strain was less susceptible to convalescent plasma from several donors than wild-type virus, says Ravindra Gupta, a virologist at the University of Cambridge who published the findings in a preprint in early December.

Gupta also engineered a lentivirus to express mutated versions of SARS-CoV-2's spike and found that the deletion alone made the virus twice as infectious for human cells. A third mutation, P681H, is one to watch as well, says virologist Christian Drosten of the Charité University Hospital in Berlin, because it changes the site where the spike protein is cleaved before it enters human cells.

New virus strains are common in outbreaks and often spark alarm, but few are ultimately consequential. So U.K. scientists and others were initially cautious about concluding that B.1.1.7's mutations made the virus better at spreading from person to person. But the new variant is rapidly replacing other viruses, says Müge Çevik, an infectious disease specialist at the University of St. Andrews. Yet exactly what impact each mutation has is much more difficult to assess than spotting them or showing they're on the rise, says Seema Lakdawala, a biologist at the University of Pittsburgh.

Animal experiments can help show an effect, but they have limitations. Hamsters already transmit SARS-CoV-2 virus rapidly, for instance, which could obscure any effect of the new variant. Ferrets transmit it less efficiently, so a difference may be more easily detectable, Lakdawala says. 'But does that really translate to humans? I doubt it.' A definitive answer may be months off, she predicts.

The slew of mutations also raised worries that the South African or U.K. lineage might lead to more severe disease or even evade vaccine-induced immunity. So far there is little reason to think so. Whereas some mutations have been shown to let the virus evade monoclonal antibodies, vaccines and natural infections both appear to lead to a broad immune response that targets many parts of the virus, says Shane Crotty of the La Jolla Institute for Immunology. 'It would be a real challenge for a virus to escape from that.' The measles and polio viruses have never learned to escape the vaccines targeting them, he notes: 'Those are historical examples suggesting not to freak out.'

At a 22 December press conference, BioNTech CEO U?ur ?ahin pointed out that the U.K. variant differed in only nine of more than 1270 amino acids of the spike protein encoded by the messenger RNA in the very effective COVID-19 vaccine his company developed with Pfizer. 'Scientifically it is highly likely that the immune response by this vaccine also can deal with the new virus,' he said. Experiments are underway that should soon confirm that, ?ahin added.

Another major question is how the virus accumulated a host of mutations in one go. So far, SARS-CoV-2 typically acquired only one to two mutations per month. Scientists believe the new variant may have gone through a lengthy bout of rapid evolution in a chronically infected patient who then transmitted the virus. 'We know this is rare but it can happen,' says World Health Organization epidemiologist Maria Van Kerkhove.

Sébastien Calvignac-Spencer, an evolutionary virologist at the Robert Koch Institute, says the United Kingdom's new COVID-19 lockdown and other countries' border closures mark the first time such drastic action has been taken based on genomic surveillance in combination with epidemiological data. 'It's pretty unprecedented at this scale,' he says. But the question of how to react to disconcerting mutations in pathogens will crop up more often, he predicts. Most people are happy they prepared for a category 4 hurricane even if the predictions turns out to be wrong, Calvignac-Spencer says. 'This is a bit the same, except that we have much less experience with genomic surveillance than we have with the weather forecast.'

To Van Kerkhove, the arrival of B.1.1.7 shows how important it is to follow viral evolution closely. The United Kingdom has one of the most elaborate monitoring systems in the world, she says. 'My worry is: How much of this is happening globally, where we don't have sequencing capacity?' Other countries should beef up their efforts, she says. And all countries should do what they can to minimize transmission of SARS-CoV-2 in the months ahead, Van Kerkhove adds. 'The more of this virus circulates, the more opportunity it will have to change,' she says. 'We're playing a very dangerous game here.'