Evidence that a variant of the coronavirus identified in South Africa might compromise immunity sparks concerns about vaccine effectiveness. 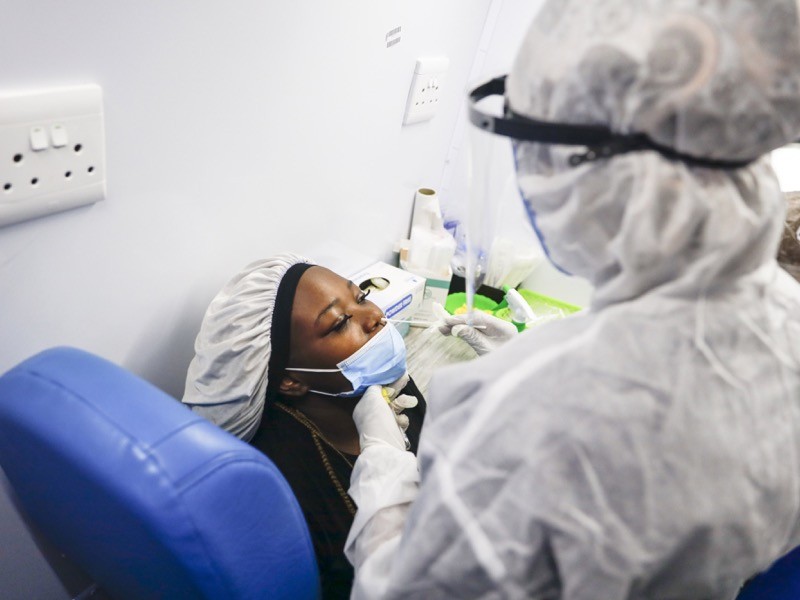 A mobile coronavirus testing unit in South Africa, where the 501Y.V2 variant was detected in late 2020.Credit: Guillem Sartorio/Bloomberg/Getty

Evidence is growing that some coronavirus variants could evade immune responses triggered by vaccines and previous infections. Researchers are trying to make sense of a tsunami of lab studies released this week that raise concerns about some emerging variants and mutations.

'Some of the data I've seen in the last 48 hours have really scared me,' says Daniel Altmann, an immunologist at Imperial College London, who worries that some of results could portend a reduction in the effectiveness of COVID-19 vaccines.

But the picture is murky, Altmann and other scientists emphasize. The studies  which examined the blood of small numbers of people who had recovered from COVID-19 or received a vaccine  probed only their antibodies' capacity to neutralize' variants in laboratory tests, and not the wider effects of other components of their immune response.

Neither do the studies indicate whether the changes in antibody activity make any difference to the real-world effectiveness of vaccines or the likelihood of reinfection. 'Are these changes going to be important? I really don't know,' says Paul Bieniasz, a virologist at the Rockefeller University in New York City, who co-led one of the studies.

Much of the concern centres around a variant that researchers identified in South Africa in late 2020. A team led by Tulio de Oliveira, a bioinformatician at the University of KwaZulu-Natal in Durban, South Africa, linked the variant  called 501Y.V2  to a fast-growing epidemic in Eastern Cape province that has since spread across South Africa and into other countries [Reference Tegally et al. 2020 - 1]. The lineage carries many mutations in the SARS-CoV-2 spike protein  the immune system's prime target, which allows the virus to identify and infect host cells  including some changes linked to weakened antibody activity against the virus [Reference 2 & Cele et al. 2021 - 3].

The Eastern Cape was hit hard by South Africa's first COVID-19 wave, and researchers wondered whether the rapid spread of 501Y.V2 could be partly explained by its ability to elude previously established immune responses.

To investigate this, de Oliveira, virologist Alex Sigal at the Africa Health Research Institute in Durban and other colleagues isolated 501Y.V2 viruses from people infected with the variant4. They then tested the variant samples against serum  the antibody-containing portion of blood  taken from six people who had recovered from COVID-19 caused by other versions of the virus. This convalescent serum tends to contain neutralizing, or virus-blocking, antibodies that can prevent infection. The researchers found that the convalescent serum was much worse at neutralizing 501Y.V2 than at neutralizing variants that circulated earlier in the pandemic. Some people's plasma performed better against 501Y.V2 than did others', but in all cases, the neutralizing power was substantially weakened, says de Oliveira. 'It's extremely worrying.'

In a separate study5, a team led by virologist Penny Moore at the National Institute for Communicable Diseases and the University of the Witwatersrand in Johannesburg, South Africa, probed the effects of convalescent serum on various combinations of spike mutations found in 501Y.V2. They did this using a pseudovirus'  a modified form of HIV that infects cells using the SARS-CoV-2 spike protein.

These experiments showed that 501Y.V2 contains mutations that blunt the effects of neutralizing antibodies that recognize two key regions of spike: its receptor-binding and N-terminal domains. Pseudoviruses with the full package of 501Y.V2 mutations were fully resistant to convalescent serum from 21 out of 44 participants, and were partly resistant to the vast majority of people's sera, Moore's team found.

There is now proof of several reinfections with 501Y.V2 in South Africa, says de Oliveira. It seems increasingly likely that the variant's ability to spread in places hit hard by earlier waves of COVID-19 is being driven, in part, by its capacity to evade immune responses that developed in response to earlier versions of the virus.

'It becomes virtually inescapable that that's what's happening,' says Bieniasz, noting that variants identified in Brazil and the United Kingdom carry some of the same spike mutations.

Both South African teams will soon test the 501Y.V2 variant with serum from people who participated in COVID-19 vaccine trials, and similar studies are under way at labs worldwide. A team co-led by Bieniasz found that mutations in the receptor-binding domain of 501Y.V2 caused a modest drop in the potency of antibodies from people who had received either the Pfizer or Moderna mRNA vaccines6. That's 'a reassuring finding', says Moore, but it will be important to test the consequences of other mutations in 501Y.V2.

Whether these could lessen the effectiveness of vaccines is still uncertain, says Volker Thiel, an RNA virologist at the University of Bern in Switzerland. Most COVID-19 vaccines elicit high levels of antibodies that target diverse regions of the spike protein, so some of the molecules are likely to be able to block variants of the virus. And other components of the immune response, such as T cells, might not be affected by 501Y.V2. 'Although the vaccines target only the spike gene, they should still mount an immune response that is diverse enough that these new variants should be covered,' Thiel says. 'But experimental studies need to be done.'

Data from ongoing efficacy trials and national vaccine rollouts should be able to uncover the effects of the variants. Several vaccines are still being trialled in South Africa, and researchers will be watching for any drop in their ability to prevent COVID-19 that's linked to the rise of 501Y.V2.

A dampened antibody response to variants such as 501Y.V2 might not be much of a problem in practice, says Marion Koopmans, a virologist at the Erasmus Medical Center in Rotterdam, the Netherlands. 'You can see some change in a lab assay, which does not have an effect in a person because that person still has enough antibodies to neutralize the infection.' It can also be difficult to disentangle whether reinfections are due to waning immune responses triggered by the first infection, or to the effects of a mutation, she adds.

Clues are also beginning to emerge about the behaviour of a fast-spreading variant identified in the United Kingdom, known as B.1.1.7. In pseudovirus experiments, researchers at biotech firm BioNTech in Mainz, Germany, found that B.1.1.7's spike mutations had little effect on sera from 16 people who had received the vaccine the company developed with Pfizer7. Meanwhile, a team led by virologist Ravindra Gupta at the University of Cambridge, UK, looked at the sera of 15 people who had received the first of two doses of the same immunization8; the team found that 10 people's sera was less effective against B.1.1.7 than against other versions of SARS-CoV-2. These changes shouldn't make a difference to the vaccine's effectiveness now, says Gupta, but they could as antibody levels wane over time.

What this week's results mean for battling the pandemic are not yet clear. It is a top priority for researchers to determine whether mutations in 501Y.V2 are responsible for reinfections. If they are, says de Oliveira, 'the whole idea of herd immunity would become a pipe-dream, at least from natural infection'.