Omicron relatives called BA.4 and BA.5 are behind a fresh wave of COVID-19 in South Africa, and could be signs of a more predictable future for SARS-CoV-2. 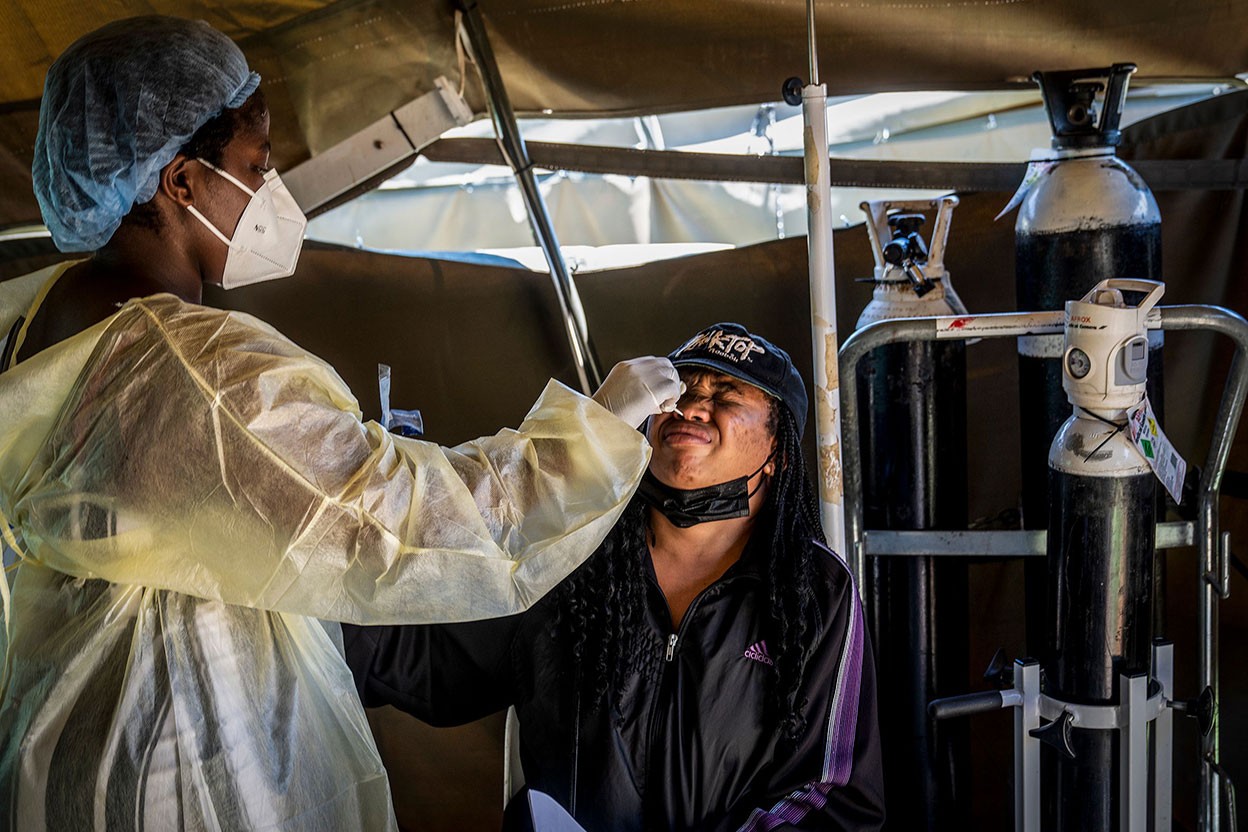 Infections with new variants of Omicron are rising in South Africa and Europe. Credit: Shiraaz Mohamed/AP/Shutterstock

Here we go again. Nearly six months after researchers in South Africa identified the Omicron coronavirus variant, two offshoots of the game-changing lineage are once again driving a surge in COVID-19 cases there.

Several studies released in the past week show that the variants  known as BA.4 and BA.5  are slightly more transmissible than earlier forms of Omicron (Ref 1), and can dodge some of the immune protection conferred by previous infection and vaccination (Ref 2,3).

Were definitely entering a resurgence in South Africa, and it seems to be driven entirely by BA.4 and BA.5, says Penny Moore, a virologist at the University of the Witwatersrand in Johannesburg, South Africa, whose team is studying the variants. Were seeing crazy numbers of infections. Just within my lab, I have six people off sick.

However, scientists say it is not yet clear whether BA.4 and BA.5 will cause much of a spike in hospitalizations in South Africa or elsewhere. High levels of population immunity  provided by previous waves of Omicron infection and by vaccination  might blunt much of the damage previously associated with new SARS-CoV-2 variants.

Moreover, the rise of BA.4 and BA.5  as well as that of another Omicron offshoot in North America  could mean that SARS-CoV-2 waves are beginning to settle into predictable patterns, with new waves periodically emerging from circulating strains (see Omicrons new identities). These are the first signs that the virus is evolving differently, compared with the first two years of the pandemic when variants seemed to appear out of nowhere, says Tulio de Oliveira, a bioinformatician at Stellenbosch University in South Africa, who led one of the studies. 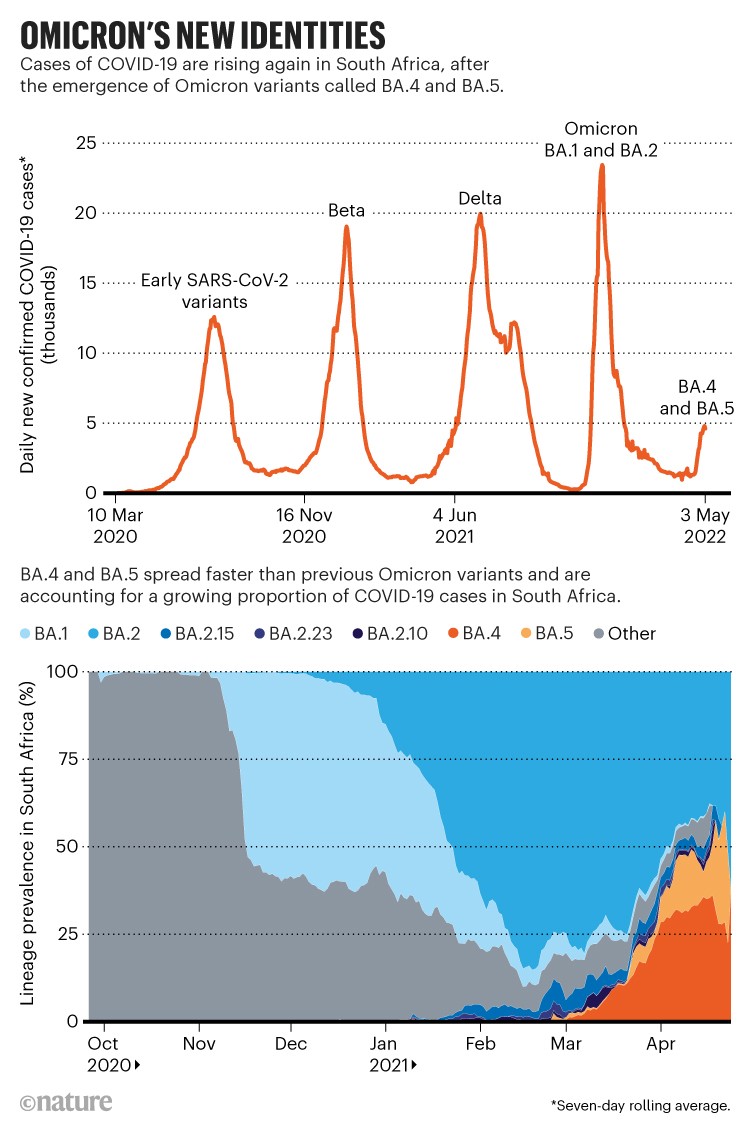 By analysing viral genomes from clinical samples, de Oliveira and his colleagues found1 that BA.4 and BA.5 emerged in mid-December 2021 and early January 2022, respectively. The lineages have been rising in prevalence since then, and currently account for 6075% of COVID-19 cases in South Africa. Researchers have also identified the variants in more than a dozen other countries, mostly in Europe.

On the basis of the growth in BA.4 and BA.5 case numbers in South Africa  which now average nearly 5,000 per day, from a low of around 1,200 in March  de Oliveiras team estimates that the variants are spreading slightly faster than the BA.2 sub-lineage of Omicron (which itself was a bit more transmissible than the first Omicron variant, BA.1). The study was posted on the medRxiv preprint server and has not yet been peer-reviewed.

The boost in transmissibility is quite an advantage, and similar in magnitude to the advantages that some other fast-spreading SARS-CoV-2 variants had over their predecessors, says Tom Wenseleers, an evolutionary biologist at the Catholic University of Leuven in Belgium. Taking everything together and looking at all the data, it seems a sizeable new infection wave is certain to come.

Jesse Bloom, a viral evolutionary biologist at Fred Hutch, a research centre in Seattle, Washington, agrees that BA.4 and BA.5 are spreading faster than other Omicron lineages. What is still unclear is why they are more transmissible, he says. One possibility is that they are just inherently better at transmitting. The other is that the variants are better at eluding immune responses such as antibodies, allowing them to infect people with prior immunity.

Both are closely related to BA.2  although exactly how is not clear, Bloom adds (see Pathogen progression). BA.4 and BA.5 both carry a key mutation called F486V in their spike proteins  the viral protein responsible for infection and the prime target of immune responses. Blooms team has previously found that this mutation could help variants to dodge virus-blocking antibodies. 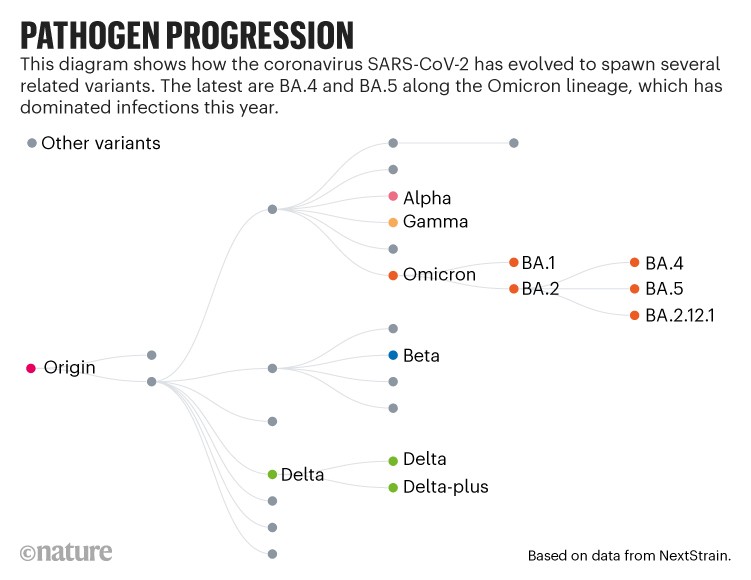 Further studies suggest that BA.4 and BA.5 are growing, at least in part, because of their ability to evade immune responses. A team led by virologist Alex Sigal at the Africa Health Research Institute in Durban, South Africa, analysed blood samples from 39 people who had been infected during the first Omicron wave, 15 of whom had been vaccinated2.

In lab experiments, antibodies in these samples were several times less effective at preventing cells from being infected by BA.4 or BA.5 than they were at keeping out the original Omicron strain. However, antibodies produced by people who had been vaccinated were more potent against the new variants than were those from people whose immunity stemmed solely from BA.1 infection. The study was posted on medRxiv.

Another study3, posted on the ResearchSquare preprint server and led by virologist Xiaoliang Xie at Peking University in Beijing, also found that antibodies triggered by BA.1 infection were less potent against BA.4 and BA.5. Moore says the results chime with her unpublished experiments, too.

BA.4 and BA.5s capacity to escape immunity, although not dramatic, is enough to cause trouble and lead to an infection wave  but the variants are not likely to cause disease much more severe than was seen during the previous wave, especially in vaccinated people, Sigal said in a Twitter post. They clearly have an advantage in antibody escape, which is one contributing factor in why they are spreading, says Bloom.

Hospitalizations are slowly ticking up in South Africa  from a low of just under 2,000 people in hospital with COVID-19 in early April  but researchers say its too soon to tell whether BA.4 and BA.5 will put much pressure on health-care systems. The hospitals are empty in South Africa and we have high population immunity, says de Oliveira.

Although BA.4 and BA.5 have been detected in several European countries and in North America, the variants might not set off a fresh COVID-19 wave in these places  at least right away. The closely related BA.2 variant has just swept through Europe, so the populations immunity could still be high, says Wenseleers. It gives hope that maybe in Europe it will have a smaller advantage and will cause a smaller wave.

Some parts of North America are also seeing the rise of other Omicron sub-lineages that have spike-protein mutations in some of the same places as in BA.4 and BA.5. One such variant  called BA.2.12.1  also has the capacity to evade antibodies triggered by a previous Omicron infection and vaccination, according to the study3 led by Xie, and separate work by virologist David Ho at Columbia University in New York City. (Ho hasnt yet reported his teams data in a preprint, but has shared them with US government officials.)

The emergence of these strains suggests that the Omicron lineage is continuing to make gains by eroding immunity, says Ho. Its pretty clear that there are a few holes in Omicron that are gradually being filled up by these new sub-variants.

If SARS-CoV-2 continues along this path, its evolution could come to resemble that of other respiratory infections, such as influenza. In this scenario, immune-evading mutations in circulating variants, such as Omicron, could combine with dips in population-wide immunity to become the key drivers of periodic waves of infection. It is probably what we should expect to see more and more of in the future, says Moore.

Previous variants, including Alpha, Delta and Omicron, differed substantially from their immediate predecessors, and all emerged, instead, from distant branches on the SARS-CoV-2 family tree.

Wenseleers and other scientists say we shouldnt rule out more such surprises from SARS-CoV-2. For instance, Delta hasnt completely vanished and, as global immunity to Omicron and its expanding family increases, a Delta descendant could mount a comeback. Whatever their source, new variants seem to emerge roughly every six months, notes Wenseleers, and he wonders whether this is the structure that COVID-19 epidemics will settle into.

That is one way to read the patterns that have been observed so far, says Bloom. But I think we should be cautious in extrapolating general rules from a fairly short observation time frame.