Nature (Vol. 535, pp. 335, 2016) report our recent results on the use of genetic sequences to uncover HIV-1 transmission patterns in young woman in South Africa (de Oliveira et al. Lancet HIV 2016). The paper was presented as a Keynote at AIDS 2016 conference. 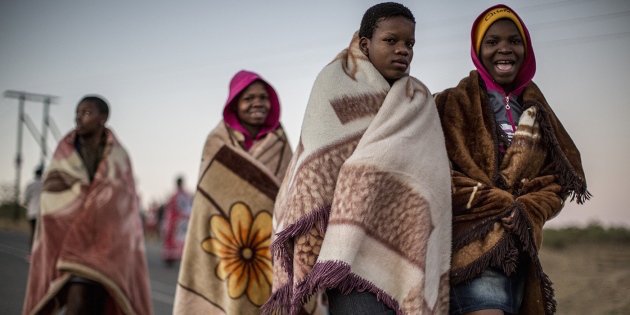 Sex between young women and older men is no secret in South Africa. The name 'blesser' is commonly used to describe a man who may at first pay for a teenager's bus fare to high school, then buy school supplies she cannot afford, and perhaps lunch at a decent cafe. Over time, the adolescent sleeps with her provider.

A genetic analysis, lead by Prof. Tulio de Oliveira, now suggests how this social phenomenon plays into the cycle of HIV transmission in the country, which has the world's largest HIV epidemic. By analysing the similarity of viral genetic sequences from nearly 1,600 people with HIV in one community in KwaZulu-Natal, the study shows that adolescent girls and women in their early 20s tend to pick up the virus from men aged around 30. When the women grow older, they go on to infect their long-term partners, who in turn may pass the virus on through affairs with younger women.

This is the engine driving high rates of HIV, says epidemiologist Salim Abdool Karim, senior author of the unpublished study and director of the Centre for the AIDS

Program of Research in South Africa (CAPRISA). He presents the work this week at the International AIDS Conference in Durban.

Karim thinks that the study adds to growing evidence that HIV-free young women in regions with very high rates of HIV should be encouraged to take antiretroviral medications regularly to prevent infection. The World Health Organization also recommends that people at substantial risk of HIV be offered what is known as PrEP (pre-exposure prophylaxis). But, owing in part to disappointing results in clinical trials, the South African government has not yet recommended PrEP for young women.

Karim's study also shows the importance of making broader social changes, adds Michel Sidibe, executive director of the Joint United Nations Programme on HIV/AIDS (UNAIDS). In parts of South Africa, 8 times as many teenage girls have HIV as do teenage boys, and in some communities in KwaZulu-Natal, a 15-year-old girl has an 80% risk of getting HIV in her lifetime.' Something that underlies the study is how common it is for older men to have sex with young girls. Pills are useful, but how can we break this silence around the lack of enforcement of laws that protect young women' How can we invest in the capacity of people to claim their rights and reduce this kind of violence''

'This is the engine driving high rates of HIV.'

Researchers have long known of the high burden of HIV infections in young South African women, and that they get infected by older men, says Thomas Quinn, an epidemiologist at Johns Hopkins Bloomberg School of Public Health in Baltimore, Maryland, who was not involved in the study. But, he says, 'it is very exciting to use molecular genetic information to actually show how the virus spreads among people' ' and to pinpoint the ages of women and men at key points in the cycle of HIV transmission.

Karim has tracked HIV genetic data for the past couple of years, and his work has already affected how governments and international organizations tackle the virus. He has been sharing results regularly with Deborah Birx, the US Global AIDS Coordinator who oversees the US President's Emergency Plan for AIDS Relief (PEPFAR), the largest federal funder of HIV-prevention research.

In 2014, PEPFAR launched an initiative called DREAMS to protect young women from HIV, in response to the finding that more than 1,000 women aged 16'24 become infected every day in southern and eastern Africa. When Birx heard details of Karim's results last year, she convinced PEPFAR to target particular demographic groups. For example, she says, half of the recipients of the US$85-million DREAMS Innovation Challenge, announced on 18 July, are 15- to 19-year-old girls.

Despite the results, health officials remain reluctant to recommend PrEP for adolescent girls and young women. In June, the South African government endorsed PrEP for sex workers ' but not for other high-risk groups, such as gay men and young women. One reason for its hesitancy is that the treatments have not proved effective in clinical trials, and blood tests have suggested that is because women in these trials did not consistently take their medications (either daily pills or a vaginal gel).

But at the conference, the CAPRISA team announced another as-yet-unpublished finding that suggests a woman's vaginal microbiome may be in part responsible for the inefficacy of PrEP. A study of women who used the gel tenofovir to prevent HIV infection suggests that it was less effective in those who had Gardnerella vaginalis bacteria in their vaginal lining. The researchers found that G. vaginalis absorbed the PrEP drugs, reducing the amount of medication in the blood.

This hints that more women may actually have taken their medications than the disappointing blood tests from earlier trials suggested, Karim says ' and also that treatment for an imbalance in vaginal bacteria might help PrEP to work better in some young women.