Durban - An infectious disease specialist says that although the world is much more prepared to deal with a pandemic than in previous years, African countries are still unable able to respond adequately to a respiratory virus like Covid-19. 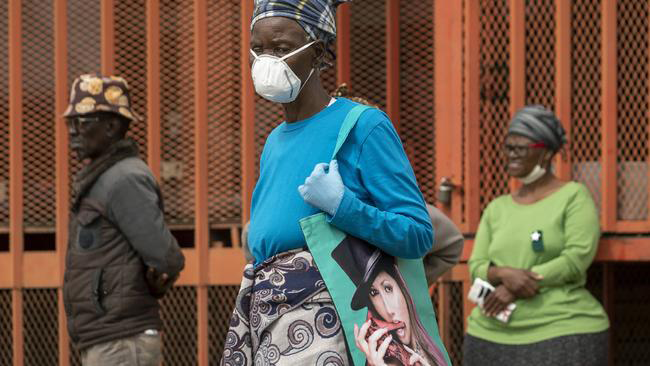 An elderly woman worker wearing a face mask and gloves to protect herself against the coronavirus, joins the queue to receive her social grant outside a pay point in Thokoza, east of Johannesburg. Picture: AP Photo/Themba Hadebe

Dr Richard Lessells, an infectious disease specialist at the University of KwaZulu-Natal, said the coronavirus had been compared to four influenza epidemics in history that killed many people. Lessells said the 'Spanish flu' of 1918-1920 had killed the most, with about 50million people around the world dying from about 500million infections.

He said although the coronavirus was less deadly than Sars or Mers, it was able to spread easier and this was why it was prevalent in so many countries. Lessells pointed to developments since the previous pandemics hit.

'We are much better prepared now for a respiratory virus pandemic than we have ever been. We have learnt from other epidemics what the most important measures are in the public health response - that is why the World Health Organisation keeps stressing the need for a comprehensive response that involves identifying cases, isolating them, quarantining and following up their close contacts, and taking measures to keep people apart and break transmission chains in the community (social distancing)'.

'This approach is all based on evidence of what works from previous respiratory virus epidemics. Also, our scientific capacity is much stronger - this has been highlighted by the fact that within a few days of the first reported Covid-19 case, we knew the full genetic sequence of the virus responsible and research groups around the world could get to work on developing vaccines. Although people think 18 months to develop a vaccine is a long time, this will be much shorter than the usual time scale of five to 15 years,' he said.

Lessels said there were multiple clinical trials investigating treatments, and one had been completed a few weeks ago.