The Covid-19 outbreak at St Augustine's Hospital in Durban which forced health authorities to close it down, resulted in 119 people testing positive and 15 patient deaths. 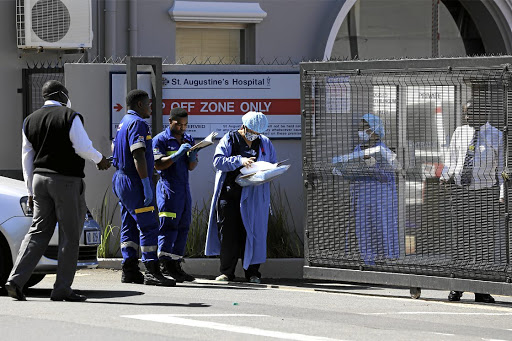 There were 119 cases identified at St Augustine's Hospital, 39 of them patients and 80 staff. Fifteen of the 39 patients died.

The Covid-19 outbreak at St Augustine's Hospital in Durban which forced health authorities to close it down, resulted in 119 people testing positive and 15 patient deaths.

The outbreak is thought to have been sparked through transmission from a patient being assessed for the virus in the emergency department, to another patient being admitted at the same time with a suspected stroke.

That's according to an investigation led by the University of KwaZulu-Natal which found that between March 9 and April 30, there were 119 confirmed cases identified at the hospital.

Thirty-nine were patients and 80 were staff members.

Fifteen of the 39 patients died from contracting the virus.

'The most plausible explanation for the outbreak is that there was a single introduction of the severe acute respiratory syndrome-related coronavirus 2 (SARS-CoV-2) to the hospital in early March, most likely through transmission from a patient being assessed for Covid-19 in the emergency department to another patient being admitted at the same time with a suspected stroke. The virus then spread widely through the hospital, involving patients and health-care workers in at least five wards,' the investigating team found.

'The investigation harnessed the genomics expertise of the KwaZulu-Natal Research Innovation & Sequencing Platform (Krisp), a UKZN research centre. Genetic sequences of SARS-CoV-2 were generated and analysed to help understand the spread of the virus through the hospital,' UKZN spokesperson Normah Zondo said.

'Through detailed analysis of the timelines - which wards patients were on, when their symptoms started, when they tested positive - we were able to build a hypothesis of the most likely chain of events and understand how the virus spread around the hospital. Our genetic analysis supported this hypothesis and gave us confidence that our explanation was correct.'

'To us, our findings highlighted how easily and quickly this virus can spread through a hospital. The initial spread of the virus was not recognised at the time, because the first patient who we think was infected in the emergency department was not initially suspected of having Covid-19. She did not have any of the typical risk factors and initially only had fever without cough or other respiratory symptoms. By the time she was diagnosed with Covid-19 and the hospital began responding to the outbreak, several other patients and health-care workers had already been infected,' Lessells explained.

The investigation into the outbreak began on April 4 after the identification of 13 confirmed Covid-19 cases and three deaths at the hospital.

Prof De Oliveira said the investigation also revealed that the outbreak led to clusters of Covid-19 cases in a local nursing home where four residents tested positive and in an outpatient dialysis unit operated by National Renal Care on the hospital campus.

'Overall, we estimate that the hospital outbreak and its spread to these other institutions accounted for about 14% of Covid-19 cases in KwaZulu-Natal reported up to April 30. This highlights the risk that outbreaks like this become what we call amplifiers of transmission, that is they fuel transmission in the wider community.'

The investigators found that though the case fatality rate was very high, almost all the deaths were associated with the recognised risk factors such as older age and chronic health conditions such as diabetes, hypertension, heart disease and kidney disease.

'Fourteen staff members required hospital admission but none were admitted to intensive care and none died. Although the majority were nurses or nursing students, there were a few cases in staff not involved in direct patient care. While the investigation cannot rule out that some of these infections were acquired in the community, the phylogenetic analysis showed that all 18 DNA sequences from the outbreak were almost identical, pointing to a single source of infection and widespread transmission in the hospital.'

Prof Moosa said many of the core recommendations to reduce the risk of similar outbreaks came back to the strengthening of infection prevention and control (IPC) systems and practices throughout hospitals.

'We call on management to promote a culture in which IPC is everyone's responsibility and that everyone has a role to play.'

- Vigilance throughout hospitals for acute respiratory illness, especially in green zones where patients considered low risk for Covid-19 have been admitted.

- Training on Covid-19, especially on infection prevention and control, should be mandatory for all staff and implementation of IPC practices should be monitored closely.

- The importance of hand hygiene needs to be continually emphasised and hand hygiene practices need to be monitored.

- Environmental cleaning practices need to be aligned with the national Covid-19 IPC guidelines and the national IPC framework manual.

- Physical distancing inside and outside the hospital should be promoted.

- Consideration should be given to weekly PCR testing of all front-line staff.

- Zondo said the report had been shared with the university's executive management team, the KwaZulu-Natal department of health, the chair of the ministerial advisory committee on Covid-19, Prof Salim Abdool Karim, Netcare management, and the National Renal Care management unit.

'Feedback sessions have been run at St Augustine's Hospital with hospital managers, unit managers and doctors and the findings have also been presented to the ministerial advisory committee and the National Institute for Communicable Diseases (NICD). The report is also being made public today, together with the data generated and analysed.'