An investigation into the first major outbreak of Covid-19, at a Durban hospital, shows that staff members spread the virus, raising concerns about the safety of healthcare workers as infections rise. 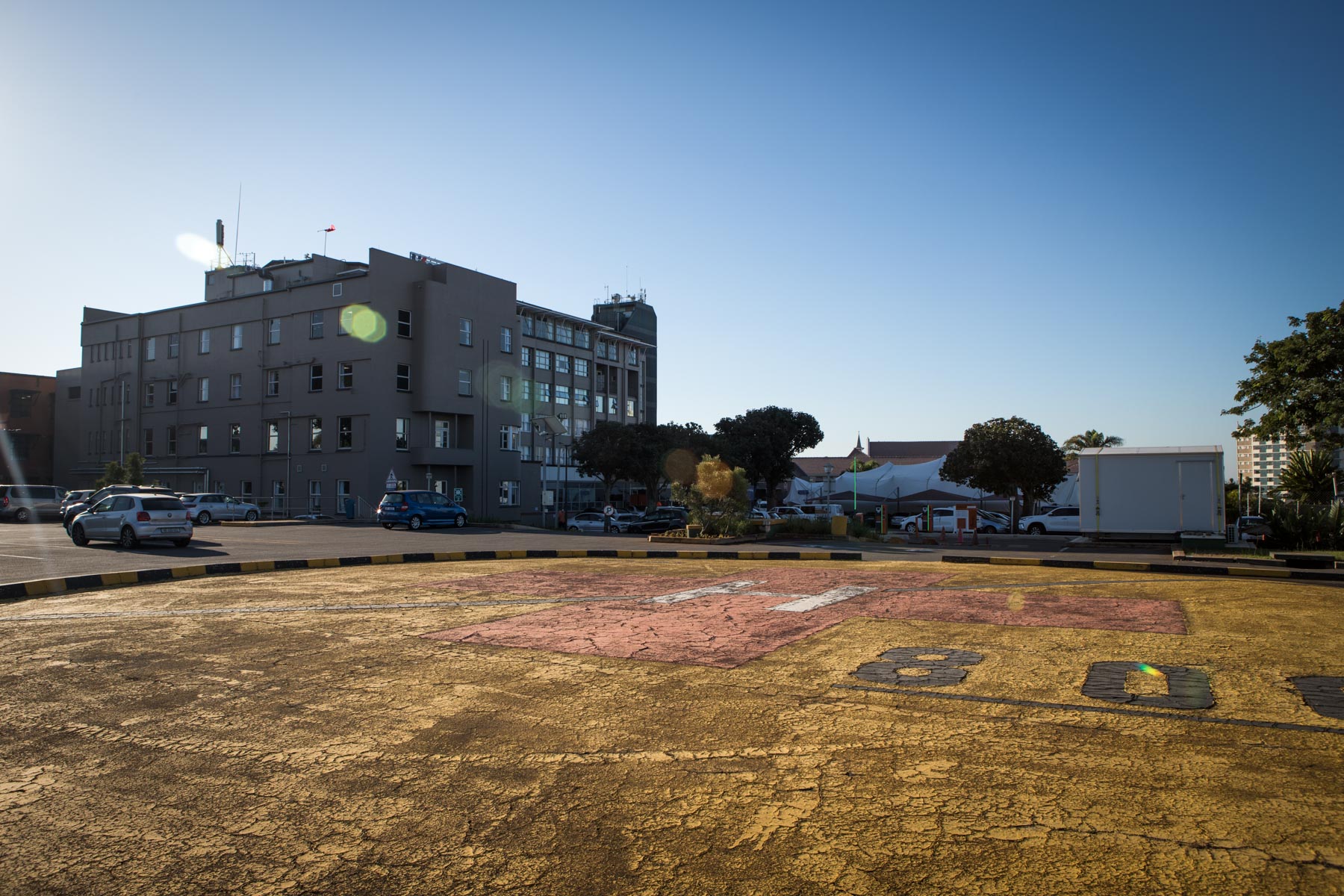 1 June 2020: The Life Entabeni Hospital in Berea, Durban, where at least four health workers have been diagnosed with Covid-19. (Photograph by Jon Ivins)

'I am the breadwinner, but I don't want to go to work to die,' the Durban nurse said, sobbing into the phone. 'I am scared of dying.' The nurse was speaking days before Anncha Kepkey, a nurse from Tygerberg Hospital in Cape Town, was buried.

At least four health workers at Life Entabeni Hospital in Berea, Durban, have tested positive for Covid-19. They became infected in the neuro-medical ward of the hospital, where four patients have reportedly died as a result of the coronavirus.

A group of health workers at Entabeni, part of the Life Healthcare Group that owns 49 hospitals and has 16 300 employees in South Africa, allege that the hospital mismanaged an outbreak at the facility and endangered their lives. They also question whether the hospital had been sufficiently transparent in informing staff, the government and the public about the infections.

'They are trying now, but I think they are just making it up as they go along,' a nurse said.

Life Healthcare has denied any wrongdoing, but did confirm that four members of staff were infected in the neuro-medical ward. Staff said the infected were not timeously tested or cared for adequately in quarantine.

Life Healthcare emergency medicine general manager Charl van Loggerenberg said the group 'categorically' refutes the allegations. 'We have a healthcare workers' exposure policy in place to ensure the effective and safe management of healthcare workers who become exposed to the virus'.

'This policy is aligned to the NICD [National Institute for Communicable Diseases] guidelines and hospital management confirms that the policy was followed appropriately.'

Entabeni health workers did not want to be identified for fear of reprisal.

One said the Covid-19 infections had spread quickly in the neuro-medical ward and provided the names of four patients who died and were in close contact with one another in the ward. Two were renal patients. The hospital group would not confirm the deaths, citing patient confidentiality.

Another Entabeni health worker said: 'I think for once the public sector has one up on us. We have had no training for Covid-19 and nobody from the government or an independent agency comes to inspect what we are doing'.

'People aren't aware of the statistics, so they assume the problem will be in the public health sector. If you complain, you are labelled a know-it-all or a troublemaker, so you have to go with the flow.'

'The hospital never spelt out all the protocols. They just make you sign papers ... It is chaotic - people are shoved into wards here and there. It is all about making money.'

'I don't feel like going to work. A lot is kept in secret. Some doctors seem to know what they are doing when it comes to Covid-19 and others don't. You can't work for someone who isn't transparent.'

Van Loggerenberg said the hospital group follows the NICD guidelines as well as sound labour relations practices. He added that staff working in the neuro-medical ward are issued surgical masks because it is a 'decanting ward' for patients who have tested negative for Covid-19.

Entabeni staff members said they expressed concern when they suspected the infections and demanded proper personal protective equipment (PPE), including more efficient N95 masks, but these were refused. 'We asked for masks, caps, visors, boots and gowns. The ward was open-plan,' one nurse said.

Another said: 'When the first patient was diagnosed with Covid-19, he presented with all the symptoms and doctors confirmed it but ... all the information was not shared with us.' The health worker said 'things have improved since the infections, but staff members are stressed and uneasy. Most are not unionised and, though afraid, do not want to prejudice their income. They think the hospital's management is not being fully transparent.'

The healthcare group has made the 'necessary notifications to the NICD and Department of Health', Van Loggerenberg said, and continues to ensure that the risk of infection of patients, employees, doctors and visitors is 'reduced through general Covid-19 screening before entering our facilities'.

In addition, a Covid-19 doctor's committee collaborates with hospital management for the 'appropriate management of clinical and infection protection and control measures,' he said.

National Education, Health and Allied Workers' Union (Nehawu) spokesperson Khaya Xaba said stringent measures have to be put in place to protect health workers, especially in private hospitals where there is less scrutiny of management than in state hospitals.

'The number of workers infected in the private sector is much higher than the public sector,' he said. Xaba didn't have the exact figures, but said more than 500 private healthcare workers in South Africa have been infected with Covid-19, 'far more than public sector workers.

Attempts to verify this were difficult. On 19 April, the Department of Health tweeted that 328 health workers had tested positive. Private sector doctors, nurses and allied health professionals totalled 195. The public sector figure was 133.

On 6 May, various news outlets reported that Minister of Health Zweli Mkhize put the number of healthcare workers with Covid-19 at 511. He reportedly said one doctor and one nurse had died. A 28 May report by news website IOL said 1 188 health workers had been infected in both the public and private sectors in the Western Cape. A report by online news publication News24 said three nurses in the Western Cape had died.

Messages to Mkhize's spokesperson, Lwazi Manzi, went unanswered, as did questions sent to the KwaZulu-Natal Department of Health.

Xaba said private hospital groups prioritise profits and 'they have dropped the ball in the fight against the virus'. The Department of Labour, he added, 'is not pulling its weight with inspections to ensure employers provide safe working environments'.

'Not much training had been done around Covid-19, including how to use protective equipment and sanitisers and to mitigate infection dangers, said Xaba. 'People cut corners, patients are mixed and workers are not alerted as to who is infected.'

The results of a University of KwaZulu-Natal investigation into the Covid-19 outbreak at the Netcare St Augustine's Hospital were released recently and provide insights into management of the virus at hospitals.

The report says 119 confirmed cases were identified at St Augustine's between 9 March and 30 April - 39 patients and 80 staff members. It adds that the outbreak highlighted how easily and rapidly the disease can spread through a hospital. PPE was just one component of comprehensive infection prevention and control.

'There is no reason to believe that a similar outbreak cannot and will not happen in other hospitals and institutions in South Africa, in both the private and public sectors, the report says.

Linda Nordling writes in Science that the University of KwaZulu-Natal study tells a 'remarkable story about Covid-19's deadly rampage through the hospital. The study, Nordling writes, was 'a reconstruction of how the virus spread from ward to ward and between patients, doctors and nurses, based on floor maps of the hospital, analyses of staff and patient movements, and viral genomes'.

Patients rarely infected other patients. 'Instead, the virus was mostly carried around the hospital by staff and on the surfaces of medical equipment.'

Nordling quotes Michael Klompas, an infectious diseases specialist at Harvard Medical School not involved in the study, who said: 'It's a remarkable story and testimony to the virus's capacity to spread through a facility if appropriate controls are not in place.'

South Africa has a shortage of medical staff and can ill afford to lose any of them to the virus.

In an article on the Bhekisisa Centre for Health Journalism website, Joan van Dyk quotes a United Nations health agency estimate that there are about 1.3 nurses for every 1 000 people in South Africa. The World Health Organization estimates that countries need - 2.5 per 1 000 - to provide adequate care.

Yunus Moosa is an associate professor at the University of KwaZulu-Natal, where he heads the Nelson R Mandela School of Medicine's infectious diseases department. Moosa and his colleagues, Tulio de Oliveira and Richard Lessells from the KwaZulu?Natal Research Innovation and Sequencing Platform (Krisp), conducted the St Augustine's investigation.

He added that the NCID's infection and prevention control guidelines are simple and instructive. 'This is not rocket science. It should be part of the training curriculum for nurses and doctors. These are basic sensible measures to prevent the spread of germs from person to person through an intermediary like a nurse, who is responsible for doing tests on patients in succession, such as taking temperature or blood pressure.'

The St Augustine's outbreak, Moosa said, 'showed the most common mode of transmission was by nurses and fomites [contaminated objects such as stethoscopes and computer keyboards that harbour and spread the virus] acting as viral vectors.'