South AfricaĀ’s pause of its rollout of the Oxford/AstraZeneca vaccine in response to concern about a local coronavirus variant sparked global debate Ā—and shone a spotlight on how the countryĀ’s science has become vital to understanding where the pandemic may go next. 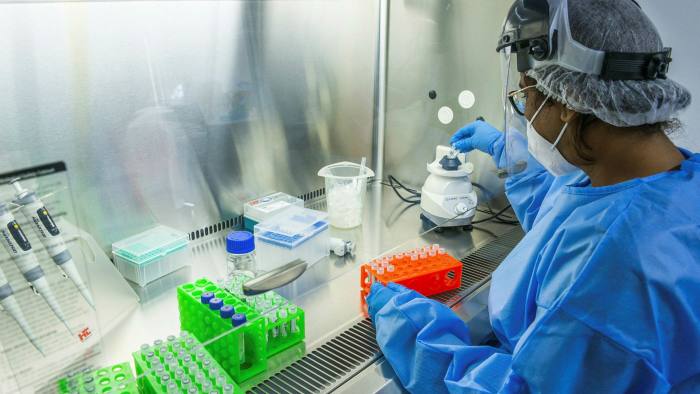 A lab technician tests material inside a fume cabinet during Covid-19 test processing at a laboratory outside Johannesburg, South Africa. Scientists are concerned the South Africa coronavirus strain could be far more widespread in the UK than test results show, threatening plans to start lifting lockdown once vaccines have been deployed Ā© Waldo Swiegers/Bloomberg

South AfricaĀ’s government last week delayed the rollout after an initial finding that AstraZenecaĀ’s vaccine failed to protect against milder Covid-19 infections involving the 501. V2 variant. It will now use Johnson & JohnsonĀ’s vaccine to start inoculations instead.

The South African suspension was based on a relatively small local trial of the AstraZeneca vaccine that did not examine effects on severe disease or death.

Other vaccines have shown good protection against severe illness including the variant and AstraZeneca has said that it is confident its vaccine performs similarly.

But the governmentĀ’s decision reflected a 'whole line of evidence on decreased [antibody] neutralization' that is 'important not only for South Africa but also for the whole world,' said Tulio de Oliveira, member of the consortium of South African specialists whose discovery of the variant during the countryĀ’s recent second wave set off a global genetic hunt. 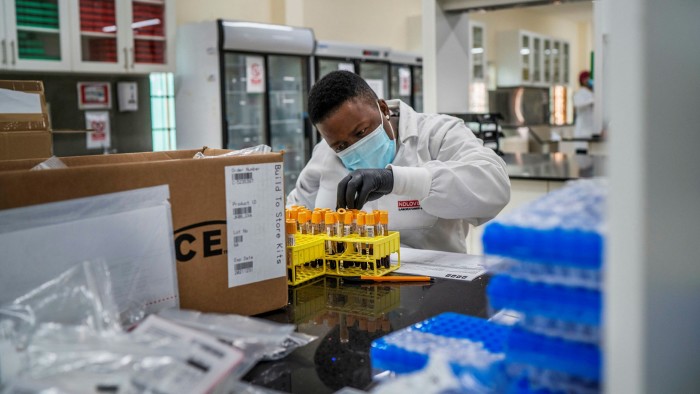 The South African team also uncovered that the new variant had a key mutation, E484K, which neutralises antibodies and is now being seen in different coronavirus variants around the world. This has implications for the design of next-generation vaccines or boosters, the emerging frontline of the pandemic.

'Without the researchers in South Africa who were able to quickly identify the variant and incorporate it into this clinical trial, the world would not yet know the effectiveness of the vaccine on this variant,' Mark Suzman, chief executive of the Bill and Melinda Gates Foundation, said.

The contribution reflects the presence of high-tech labs and academic networks in AfricaĀ’s most industrialised nation that were designed to study HIV and tuberculosis Ā— two major health scourges in South Africa, but could be rapidly repurposed for the pandemic.

In one $100m building alone there are nine Ā‘P3 plusĀ’ labs that can deal with serious live pathogens. Some countries do not even have one. The facilities are also part of a national system which made it relatively straightforward to combine them into one genomic surveillance network after a UK model early in the pandemic.

Genetic variations are what we expect to see everywhere,' Lang said.

Where weĀ’ve spotted them is where they do good science. Trudie Lang, head of the Global Health Network at University of Oxford

'It doesnĀ’t matter whether before [South African scientists] were doing TB or HIV or clinical research or genomics. They have all swung into action and thatĀ’s why theyĀ’ve been able to make such a strong response,' Trudie Lang, head of the Global Health Network at University of Oxford, said.

Sandile Cele, a 32 year-old researcher at the Durban-based African Health Research Institute who found a new way to grow the 501. V2 variant in the lab, an important breakthrough that helped show that the variant can escape antibodies and lead to reinfection.

For the South African researchers like Cele who 'have been working hard in a collaborative approach for the last year,' the next priority is to test samples of vaccines and the plasma of vaccinated people from around the world against 501. V2 and to support similar work elsewhere, de Oliveira said. 'We have shipped virus outgrown to all main repositories in the world and are trying to advance the science as much as possible even if itĀ’s not done by us,' he added.

Better understanding of the effectiveness of vaccines against variants such as 501. V2 'is the absolutely most critical research question right now' and one that also cannot be answered in labs alone, said Willem Hanekom, the director of the African Health Research Institute and co-leader of the consortium of scientists investigating 501.V2.

It is only because of past South African participation in trials of the Johnson & Johnson and Novavax vaccines that they have already been shown to have strong protection against serious illness with the 501. V2 variant. 'This is an eye-opener, in terms of how important it is to have geographic diversity,' Hanekom said.

Only about 2 per cent of all clinical trials globally take place in Africa at the best of times, and the Africa Centres for Disease Control launched an initiative last year 'to secure more than 10 late stage vaccine clinical trials as early as possible on the continent.' It is still well short of this goal.

Last year South African scientists lobbied in particular to hold part of AstraZenecaĀ’s global trials in the country in order to ensure diversity in its findings. As it made recommendations on the use of vaccines in regions with variants this week, the Africa CDC repeated its call not only for more African trials but also wider genome surveillance on the continent. Scientists in Nigeria, Senegal, and the Democratic Republic of the Congo have also contributed to AfricaĀ’s approximately 2,500 coronavirus genome sequences to date though many were done in South Africa, John Nkengasong, head of the Africa CDC, said. This will need to be dramatically scaled up to 50,000 in the next six months to track 501. V2 and other variants, he added. 'Genetic variations are what we expect to see everywhere,' Lang said. 'Where weĀ’ve spotted them is where they do good science.'