Drug resistance poses significant potential problems in the fight against HIV and TB, but little is known about how best to tackle it. Dr Tulio de Oliveira heads a network that aims to fill this knowledge gap.

Widely deployed, antiretroviral and anti-tuberculosis therapies are saving lives in southern Africa, but at the price of increasing drug resistance. An initiative by researchers at the Wellcome Trust Africa Centre for Health and Population Studies, University of KwaZulu-Natal in South Africa is showing success in bucking this trend. 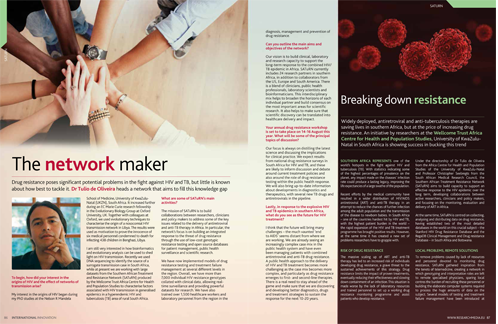 Southern Africa represents one of the world's hotspots in the fight against HIV and tuberculosis (TB). With statistics indicating some of the highest percentages of prevalence on the planet, any impact made on the diseases' infection rate could produce a lasting legacy, improving the life expectancies of a large swathe of the population.

Recent efforts by the medical community have resulted in a wider distribution of HIV/AIDS antiretroviral (ART) and anti-TB therapy in an attempt to reduce the chances of further infection among the adult population and the transmission of the disease to newborn babies. In South Africa - one of the countries hardest hit by HIV and TB, with the highest patient burden in the world ? the rapid expansion of the HIV and TB treatment programme has brought positive results. However, at the same time it has created a new set of problems researchers have to grapple with.

The massive scaling up of ART and anti-TB therapy has led to an increased risk of individuals developing drug resistance, a grave threat to the sustained achievements of this strategy. Drug resistance limits the impact of proven treatments, eventually reducing their effectiveness and slowing down containment of an infection. This situation is made worse by the lack of laboratory resources and trained personnel to set up a working drug resistance monitoring programme and assist patients who develop resistance.

Under the directorship of Dr Tulio de Oliveira from the Africa Centre for Health and Population Studies of the University of KwaZulu-Natal and Professor Christopher Seebregts from the South African Medical Research Council, the Southern African Treatment Resistance Network (SATuRN) aims to build capacity to support an effective response to the HIV epidemic over the long term, developing collaborations between active researchers, clinicians and policy makers, and focusing on the monitoring, evaluation and delivery of ART in Africa.

At the same time, SATuRN is centred on collecting, analysing and distributing data on drug resistance, having established two of the most detailed databases in the world on this crucial subject - the Stanford HIV Drug Resistance Database and the RegaDB Clinical Management and Drug resistance Database - in South Africa and Botswana...