New research from the Africa Health Research Institute (AHRI) in collaboration with KRISP shows a 43% decrease in the rate of new HIV infections between 2012 and 2017 in the Hlabisa area of northern KwaZulu-Natal (KZN), South Africa. 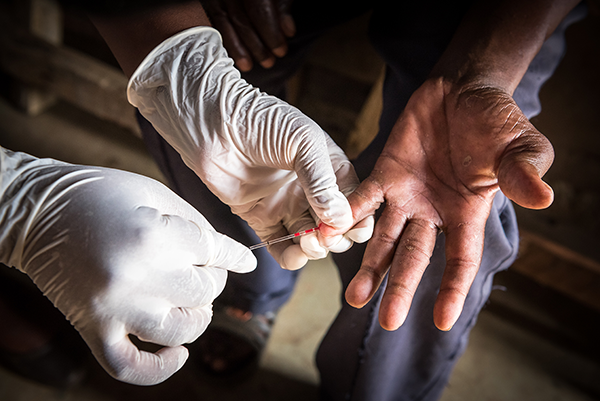 This is the first long-term study to demonstrate the impact of the scale-up of HIV testing and treatment services in South Africa, which has the highest rate of new HIV infections (incidence) in the world.

For the study, scientists from AHRI, UKZN and KRISP followed a cohort of 22,239 HIV uninfected men and women in AHRI's health and demographic surveillance and intervention area in Hlabisa to identify new HIV infections. This is the gold-standard approach to estimate infection rates. The research, which was recently published in the scientific journal, Nature Communications, reveals unequal declines in the rates of new HIV infections among men and women. Specifically, male incidence declined by 59%, and female incidence by 37%.

'HIV-uninfected men likely benefitted from the scale-up of voluntary medical male circumcision (VMMC) and higher rates of antiretroviral therapy uptake among women,' explained the paper's lead author, Dr Alain Vandormael from KRISP and AHRI. 'At least partly due to pregnancy-related HIV screening and treatment programmes, women are more likely than men to test for HIV, start ART early, and achieve long-term viral suppression - which reduces the risk of transmitting the virus. Given the heterosexual nature of the HIV epidemic in the AHRI study area, this in turn means that men had a comparatively lower risk of getting HIV from their female sexual partners.'

The research suggests that more efforts are needed to get more men onto consistent, suppressive treatment so that new HIV infections can be reduced among women. 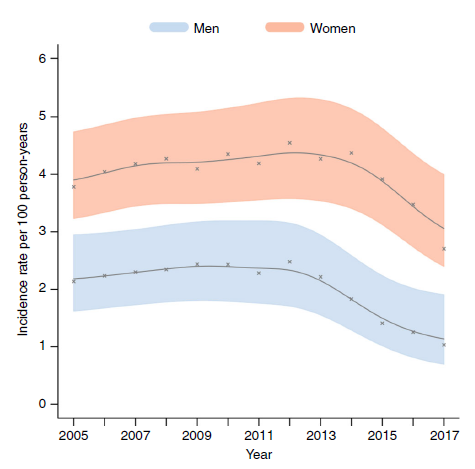 (Above: HIV incidence rates with 95% confidence intervals (CIs). The figure shows that male and female HIV incidence declined after 2012 and 2014, respectively, with an overall decline of 43% between 2012 and 2017. Source: Nature Communications)

The findings are consistent with work done in other regions in sub-Saharan Africa. For example, an ongoing study from the Rakai district in Uganda estimated a 42% decline in the overall HIV incidence rate between 2012 and 2016. In western Kenya, the scale-up of VMMC services, and to a lesser extent increased ART coverage, was associated with a 50% reduction in the HIV incidence rate between 2011 and 2016. Population-based cross-sectional studies from eSwatini (Swaziland) and South Africa have recently reported similar reductions in HIV incidence over the past six years.

'We have seen 20 years of increasing or, at best plateauing, HIV incidence in this region of KwaZulu-Natal. So it is a much needed glimpse of light in the tunnel to finally see evidence that widespread access to HIV treatment, male medical circumcision and promotion of safer sexual practices can start to bend that curve,' commented paper co-author and AHRI Faculty Member Dr Mark Siedner. 'It's early yet, and there is so much more work to be done to get HIV prevention tools in the hands of those who need them in KZN - and get these rates down to zero - which is of course our ultimate goal. But it is very reassuring to know that these positive signs of change have begun.'

Title: Declines in HIV incidence among men and women in a South African population-based cohort